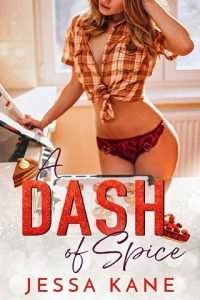 On my way into the television studio, some guy with a camera steps into my path.

“Mr. Tulane! You’ve been suspended again from the NHL for unsportsmanlike conduct. A four game penalty this time! Do you ever regret your actions?”

I pull down my Ray-Bans a touch to let him see my fresh black eye. “Hell nah.”

Several fans crowded around the entrance to the studio laugh and I keep walking, ready for this whole day to be over. It hasn’t even started yet and I’m already fucking annoyed. As the cameraman mentioned, I’m currently suspended from my dream job as an enforcer for the Brooklyn Bison over a fight that got a little out of control last week. Gloves came off, teeth were knocked out—not mine, thank Christ—and plastic surgeons were called in for the other guy.

All in all, another day at the office.

Now this morning? It’s the furthest thing from a typical day.

My agent has his panties in a twist over the league threatening to boot me. So he’s found a way for me to make nice and improve my image. Therefore, I’m out of bed before nine o’clock in the morning to act as a judge on some ridiculous reality television baking show. Apparently the contestants are horrible at baking and have been nominated by their friends and family to be embarrassed on national television.

I don’t really care who is getting humiliated here, so long as they don’t keep me trapped in this monkey suit longer than my contractually obligated five hours of filming. What the hell was my agent thinking, anyway? I’m not a people person on my best day. This whole effort to improve my King Asshole image could easily backfire.

A tingle of worry works its way up my spine, but I sniff and ignore it, stomping through the back entrance into the studio. Some kid in a headset intercepts me, guiding me to a green room where they try—and fail—to put makeup on me. There are other judges hanging around backstage. One is a stuffy British guy I’ve seen baking on television before. The other is a little mouse of a woman in huge glasses doing her best to blend in with the wall. We don’t make any small talk and before I know it, we’re being mic’d up and called to the sound stage.

“Okay,” says Headset. “Right now, the host is introducing the contestants. Also known as our victims. Next, he’ll bring out each of you, one by one, starting with Sebastian.” He gestures to the British dude. “Next will be Quinn…” The mousy girl jumps a foot in the air at the use of her name. “…followed by Aidan. We want to get their reactions to our resident celebrities walking out to judge them. Won’t that be hilarious?”

“If you say so.” I massage the center of my forehead, wishing like hell I was holding a hockey stick or resting up for the next time I hold one. There is no in between. Sleep, hockey, repeat. That’s how it has been since I laced up my first pair of skates at age four. That’s how I damn well like it. But this news of my suspension caused me to crack open a bottle of Jack last night and my head is paying for it this morning. “Let’s get this over with.”

“Yes, in just a moment,” sniffs Headset, visibly irked that we aren’t thrilled to be here. “When you get to the judges’ table, you’ll find score cards with some information about each contestant. There will be one round only in which they’ll bake—or try to bake—a three-tier red velvet cake. It’s going to be a disaster!”

“And they didn’t know they were going to be on television, these poor saps?” I ask. “If someone pulled that on me, they’d regret it.”

“Yes…” Headset licks his lips nervously. “I’m not a hockey fan, but I saw the highlights of your last fight. I wouldn’t deem it wise to ambush you on a reality show.”

“W-will we need to talk on camera?” asks Quinn, pushing up her glasses. “I’m much better at writing than verbalizing.”

“The host will ask you a question or two, yes,” responds Headset.

“Oh.” Quinn pulls her cardigan tighter around her shoulders. “Oh…fudge.”

Jesus, the woman looks like she’s about to faint. I pat her on the shoulder and she almost loses her balance. “Hey. You need to puke or something?”

“Is that meant to be comforting?”

“I’ve got five older brothers.” I shrug. “Comforting ladies ain’t in my wheelhouse.”

“Right.” She faces the entrance to the soundstage, just as her name is called. Quinn Beverley, renowned restaurant critic. “Thanks anyway for trying.”

It’s my turn next. I toss my sunglasses at Headset on my way out to the judges’ table. The crowd doesn’t seem to know whether to boo or cheer for me. And I get that a lot. Remembering my agent’s pleading text messages this morning, I paste on a smile and salute the audience. Hell, I want back on the ice enough for the both of us, don’t I? The league isn’t happy at my repeat offenses. I should be relieved they haven’t kicked me out permanently. But what about next time? I inherited this temper from my old man and it’s hard to control when it’s provoked.