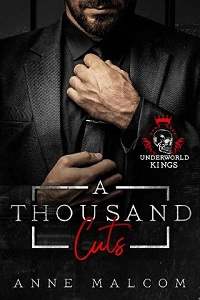 “Smile, baby, and tell me that you love me.”

He didn’t speak. Just watched me with those turquoise eyes that seemed to see right through my skin, my flesh, those eyes that cut right to the bone.

I bit the inside of my mouth until I tasted blood.

But I didn’t smile.

The taste of my own blood was coppery and bitter.

That’s what he tasted when he kissed me.

And he did kiss me.

The only kiss flavor.

It wasn’t a question.

There was never a question about that. Not since we were thirteen.

We’d loved each other since then, and we’d love each other until neither of us were breathing. There were many reasons why I loved him, like the way he kissed me. The way his lips twitched when he was trying not to smile, because he took me for ice cream every evening, no matter what. How he wore a hard and serious mask for the world, playing the act of the ‘tough guy’ so well that almost everyone believed that’s who he was.

I loved that I was the only one who knew different. That he spoke softly and gently when it was just the two of us, and that gentle part of him was only for me.

But what I loved most about him was his lack of fear. The fact that he loved me, kissed me, took me out for ice cream despite who I was.

Despite my last name.

Cristian knew my father could have him killed without a second thought if he ever hurt me.

If a boy bumped into me at school, there were quickfire apologies, pleading, fearful glances as if I had an assassin on speed dial. I was popular only because people feared what would happen if they ostracized the Don’s daughter. Because their parents, hungry for power and connections, forced them to attend the many lavish parties that were thrown at my house.

My father was respected and feared throughout the city. People pretended to like him, to love him only to further their own interests and make sure they didn’t get on his bad side. The only place he was truly loved was our home, where my mother was the one to be feared, and my brother and I adored our Papa. My younger brother was the baby of the family, the ten-year age gap between us a result of numerous miscarriages and one stillbirth. Death and tragedy weren’t just part of the family business, they lived inside our home too.

Such things might’ve broken any other couple, but my parents were not any other couple. They were the children of a crime dynasty. They did not marry for love, they married because their parents wanted a union between two families, because they wanted power and peace. Their marriage ended decades of bloodshed between the Costas and the Catalanos.

It was not a fairy tale, their courtship, their union. Nor was it told to me as one. My parents may have hidden many aspects of their life from me, but they were truthful about their union, the origin story of our family. They were both dutiful children who’d known they didn’t have a choice, my father hungry for power, and my mother resigned to the fact that she would always be a Don’s wife, that it was her destiny and her duty. My mother was also smart, raised by a cunning and fearless woman who told her that marriage might not give her love, but she’d get a different kind of power.

There were years of duty, then there were years of respect, companionship, pain and then finally, love. The love came after the pain, because my mother said that Costas could not love unless they were in agony.

“I love you,” Cristian said, the low rumble of his voice caressing my skin.

My mother was wrong. I loved Cristian with my heart and soul, and it did not hurt one bit.

He fingered the diamond ring he’d slipped on my finger this morning as we lay tangled in each other’s arms, my parents thinking I was at a sleepover, though Mama had a knowing glint in her eye as I left the house yesterday.

It was my eighteenth birthday. Papa had wanted to throw a huge party on the day of my birth, as he had done every year since I could remember. For the first time, I argued with my Papa, telling him I wanted a quiet night with my girlfriends, that we would have the party the next day.

My father quickly let me have what I wanted because he was unused to his teenage daughter making demands.

I never argued with him. Not because I was afraid, but because I didn’t need to. My father was feared throughout the city—heck, the country—but he adored his dutiful, obedient daughter. Like my mother, I knew what was expected of me as the Don’s daughter. I didn’t resent my parents or my duties. Sure, I sometimes daydreamed of a different life, a simpler one without so much death, danger and fear. One where I could know for certain that my friends liked me for who I was instead of whose daughter I was.