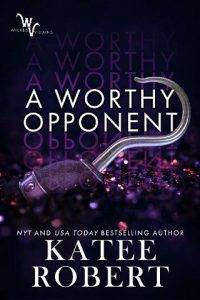 I don’t look up as I carefully set each drink on the table. Working at the Underworld feels a whole lot like swimming with sharks under the best of circumstances. Now, with a clock ticking down the seconds until I’m free, it’s significantly more dangerous. I place the final drink down and glare at Gaeton Thibault. He’s sprawled across half the booth, taking up more than his fair share, even considering how huge he is. He’s cocky and irritating, and I usually enjoy sparring with him.

Not tonight. Not with him tossing the reminder of my deadline at my feet.

I glare. “Get your feet off the table. This isn’t a barn.”

He holds my gaze for a long moment. It’s a struggle not to look away. Gaeton might have that easy charm that draws people to him, but he’s dominant right down to his big bones. He doesn’t fuck around, especially in this club. But I’m not the kind of submissive who will fall to their knees and play the silent partner to kinky bedroom games. I look down my nose at him. “Now, Gaeton.”

“You’re awfully bossy for a sub.”

“You’re awfully dense for someone who’s a general to the Man in Black.”

He chuckles and drops his feet back to the floor. “There. Are you happy now?”

Happy? As if that’s even in the realm of possibility for me. Happy is for people who aren’t walking around with my kind of sins tattooed on their soul. The weight of knowing what I left behind didn’t used to bother me. The relief of being free was too strong. Or, if not actually free, then free of him. Working for one of the scariest people in Carver City has its perks, but free will isn’t really one of them.

I realize I’ve been silent too long and snort. “You know better.” I prop a hand on my hip. “Your clothing order will be in tomorrow.”

He’s watching me too closely. People see the muscles and his general hugeness and assume Gaeton is an idiot. It’s something he’s embraced because enemies always underestimate him. I’ve been watching people too long not to know better. He’s smart as hell and has the kind of ambition that will either see him leading his own territory one day or burning the city to the ground around him.

Finally, he sits back and gives me a slow smile. “Why don’t you deliver it yourself? A little one-on-one with my favorite submissive.”

I don’t bother to resist rolling my eyes. “I always deliver it myself, you ass.”

“See you tomorrow, then.” He sinks enough innuendo into the statement to make several people within hearing range glance over. But that’s Gaeton; he likes a show, even at someone else’s expense. Implying that we’re meeting outside the Underworld—the neutral territory ruled by my employer, Hades—is a power play. An annoying one.

“Try to stay out of trouble in the meantime.” I glance at the other men at the table, but they’re all minions. No one will cause any trouble tonight, and Gaeton is here without Beast, which means the furniture is probably safe. Those two really need to fuck and get it out of their system, but no one asks my opinion.

I stop next to the bar and check the room. Most of the half-circle booths lining the walls are filled; people use the shadows for covert conversations and foreplay. In another hour or so, many of them will start filtering into the public playroom through the door at the back.

The bartender, Tisiphone, gives me a sympathetic look, which is just as much a warning as her pouring healthy splashes of whiskey into two tumblers. Tisiphone might be the nicest of Hades’s three Furies, but she’s no slouch. And she knows better than to handle me with kid gloves. She tucks a strand of long dark hair behind her ear. “Hades wants to see you. He says to bring him a drink.”

Words I really, truly don’t want to hear. I might have made a deal with Hades four years, eleven months, and twenty-eight days ago, but I’ve avoided him as much as possible since. All his deals come with teeth, and mine is no exception. Usually, he’s content to let me work as long as I don’t rock the boat, but with my contract end date coming up, apparently that’s no longer the case.