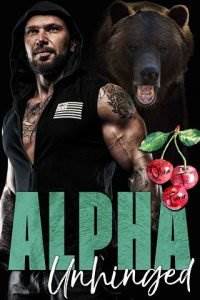 I have two beasts growling at me at the same time.

Although, our Great Dane’s vicious growls turn to pathetic whimpers when I yank the soggy tennis ball out of his mouth. Moose looks up at me with wide eyes as I raise my arm. I launch it across the valley and he takes off running, kicking up dusty dirt with his four huge paws.

I sigh as the second beast growls at me.

He’s not as easy to placate. This beast requires something I can’t provide. Only fate can give him what he’s looking for and so far, fate has been a no-show.

My inner Kodiak bear snarls as I watch our white dog with the black spots clear half of the valley in no time. He’s livid that I’m standing here, playing with Moose. Outraged that I would dare do anything except search for our mate every second of my life.

Believe me, if I knew where she was, I would go to her.

But I don’t. And that painful fact is eating me alive.

Stop it, I warn my bully of a bear as he starts to pace more violently now. He responds with a savage roar and then starts trying to claw his way out.

His intentions are clear: If you’re not going to look for her, then I will.

I flex my muscles and grit my teeth, struggling to hold him in. He wrenches and twists my insides as he tries to wrestle and force his way out. My own growl rumbles out of my throat as I push him back down.

He’s feisty today, which is a nice way of saying he’s being a nasty feral fucker. My Kodiak has always longed for our mate, we both have, but lately, it’s been something else.

He’s desperate for her and he’s taking it out on me. As if I’m not every bit as desperate to find her as he is. As if I don’t lay awake every night wondering where she is, what she looks like, when I’ll finally be able to hold her in my hands and touch her sweet soft lips. As if my insides don’t twist and clench every time I think about her out in this dangerous world without her mate by her side.

I need her so badly it’s killing me. It always has. I’m thirty-four, the oldest of the four Dixon boys, and I’m the only one who’s still alone. Where is she?

I squeeze my body with a grunt as my cruel bear tries to claw his way out. I fall to my knees as I try to shove him back in. With eyes squeezed shut and jaw clenched, I feel a wetness on my hand. Moose is back with the ball.

I yank it out of his mouth and throw it with all of the frustration and rage I’m feeling. The poor dog watches helplessly as the tennis ball soars across the ranch and lands in the forest on the far side.

He lowers his head with a whimper.

He licks my cheeks and saunters off without a care in the world. Oh, what I would give to change places with him. To not be burdened with the bitter pain of longing.

My bear gives up with a growl and slips back down deep, hunkering inside with all of the softness of broken glass.

I punch the dirt and curse under my breath as I stare at the deep knuckle marks. It wasn’t always like this.

The yearning for my mate was always there, but it was never this crippling.

I squeeze my eyes shut as I hear the carefree laughter of three happily mated couples leave the house.

All three of my brothers have found their mates. I’m the only one still flying solo. Don’t get me wrong, I am happy for them. Thrilled. It’s just hard to see everyone around you happily soaring up to the clouds with all of their dreams coming true when you’re stuck in the mud, helpless, hopeless, and trapped with an angry, frustrated bear who is too stupid or too heartless to realize that you have nothing to do with the depressing situation.

“Jacob!” Cameron shouts from behind me.

“Fuck,” I whisper. Why can’t they just leave me alone?

I hear his footsteps approaching when I don’t answer.

I glance at him over my shoulder as tears sting the back of my eyes. “Yeah. Fine.”

He exhales loudly. “We’re heading out for ice cream, why don’t you come with us?”

I turn back around and stare at the knuckle prints in the dirt.

“It would be good for you to get out.”

I shake my head. I love my brothers and we’ve been through a lot, but how can I explain to him how painful this is? He was the first of us to get his mate, a spunky girl named Mary who spilled a full pint of beer all over me when she came crashing into our lives. He doesn’t know what it feels like to be surrounded by love and be the only one rejected. The one lonesome, companionless recluse stuck on love island. It fucking sucks.