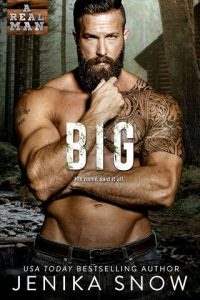 They called me Big, because of my size. But also because of what I was packing between my legs. It wasn’t that I went around showing my cock to everyone or that I even slept around. It was because I’d gotten the nickname in high school, when, on a dare for charity, I streaked during a football game, my family jewels on display on the big screen.

Still, it was a stupid, drunken adolescent act, but it had stuck with me my entire life. And honestly, I just rolled with it now.

“Hey, Big. You getting more supplies for winter?”

I glanced up at Rick, the town idiot. I wasn’t saying that to be an asshole either. He was legit an idiot in the way he had absolutely no common sense, didn’t realize living in the mountains meant you had to prepare, stock up on supplies, and know how to survive, all year.

I looked down at the butcher-paper-wrapped steaks, the bag of lettuce, the six-pack of beer, and the small watermelon that wasn’t even in season and that I was spending way too much on but wanted it regardless.

I glanced back up at Rick and lifted an eyebrow. “It’s January, Rick. Winter is done here. I was stocked up before fall even breathed down our necks.” I smirked. “This is my dinner for tonight.”

He started chuckling awkwardly and rang me up, not saying anything else.

I grabbed the paper bag Rick put all my stuff into and gave him a chin tip before heading out. I was about to walk out of the store, when I looked at the large corkboard that had random business cards on it. There were babysitting flyers, help wanted ads, and notes from people selling their shit tacked to it. But it was the cleaning service flyer that instantly grabbed my attention.

It always grabbed my attention.

I’d known of her for the last five years, a new implant to our little mountain town. Although I’d never actually spoken to her, I sure as hell wanted to. She seemed quiet, reserved almost.

I asked around when she first came here, curious about who she was, why she’d picked Stone Creek as her new residence. It wasn’t like we were massive on the map. The majority of the people who still lived here were generations old, born and bred down the line.

I’d found out she was single, had no children, and had moved here from a neighboring state. Maybe she wanted to live in the middle of nowhere, to get away from the hustle and bustle of people in city life. Hell, if my family hadn’t been generations-long residents of Stone Creek, I might have searched out a place just like this to set up shop.

I said her name over and over again. God, it sounded good.

I didn’t know what it was about her, but from the moment I’d seen her all those years ago, I thought about her, wanted her. I wanted to talk to her, get to know her. I might be a huge motherfucker size wise, but the truth was, I felt like to the right woman, and under the right circumstances, I could be brought down to my knees.

And Landry was the only woman who had ever piqued my interest. Hell, I’d been celibate for more years than I cared to count, and it was all because of her, because I only wanted her.

I looked at that cleaning service ad, at the little hand-drawn cleaning lady vacuuming, at the soap bubbles all around the edges of the paper. I didn’t need to write down the phone number of her business. I knew it by heart. I saw this ad every time I came to town, came to the grocery store, stopped at the library, hell, picked up a cup of coffee at the town square. I had her phone number memorized, because I wanted to call her.

But I was a chickenshit, maybe afraid of rejection, maybe afraid she was hesitant of me and that’s why she never said anything, never introduced herself. But the truth was, with every passing day, it was getting a little bit harder. I was getting a little bit more frustrated with myself. I was a grown-ass man. I had a business, my own home, ten acres I called my own. I shouldn’t have been some wimp who couldn’t even talk to a woman he wanted. The first woman I’d wanted in God knows how long.

In fact, I didn’t even need to come to town, not with how much I had stocked up for the winter, not with all the supplies I had. I was so prepared I would’ve survived the apocalypse for a good couple years with everything I had stored up. But I came down here hoping I’d run into her, hoping like hell that this one time I’d have the balls to actually say something to her.