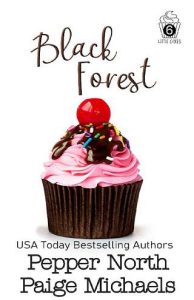 Welcome to Little Cakes, the bakery that plays Daddy matchmaker!
Cardio is good for the heart, but it isn’t the answer to finding love.
Rebounding from her husband’s affair and their subsequent divorce, Sue Taylor is on a mission to make herself irresistible to men. Convinced that exercise will fix whatever made her ex look elsewhere, she joins the gym near Little Cakes and commits to putting in the work.
When fate leads Davis Irving to coach Sue through her first workout at his gym, the silver fox is captivated by the cheerful woman in his charge. He knows his search for someone special to care for has ended. Sue doesn’t need crunches, just the special training of an experienced and devoted Daddy.

Wiping a smear of fingerprints off the glass door imprinted with the Little Cakes logo, Sue smiled at the image of Evan helping her coworker, Tori, into the car. Sue wanted everyone to have a happily ever after and had held her breath as the shy, talented woman had created a captivating love story with the handsome photographer.

She had to admit she was a bit jealous. Evan Parker was incredibly talented. Sue had followed his spectacular career. It only took a glimpse of her reflection in the mirror to squelch any thoughts that someone like that could be interested in her.

She let her gaze roam down her reflection from her thick, wavy, brown hair to her feet and back up. She held her own gaze for a moment, her brown eyes staring back at her. Plenty of people expressed envy over her hair, and with her button nose, full lips, and rosy cheeks, she figured she was pretty. As long as she didn’t glance down where she kept a few extra pounds.

Shaking negative thoughts from her mind, Sue finished cleaning the fingerprints off the door and moved on to wipe the tables of the sticky frosting that always got smeared around.

“Thanks, Sue. I can’t tell you how much I appreciate you seeing what needs to be done and taking care of it,” Ellie called as she snuck a cup of coffee from the dispenser.

“Your Daddy’s not going to like you drinking that,” Sue pointed out with a smile.

“Not me. I won’t say a peep,” Sue promised. “It’s not like I have a Daddy who’ll spank me for keeping secrets.”

“Why don’t you come with us to Blaze? Maybe your Daddy is looking for you,” Ellie invited.

“I may take you up on that,” Sue answered with a smile before patting her curvy hips. “I’ll just lose a few pounds first.”

“You’re perfect just as you are. Everything about you sparkles,” Ellie assured her.

“You’re good for my ego.” Sue brushed off the compliment with a laugh before pointing across the parking lot toward the gym on the other side of the strip mall housing Little Cakes.

“I’m headed over there after my shift. Fitness Haven sounds like it shouldn’t be too torturous, right?” Sue asked.

“You’re going to love the owner. He has this presence that makes everyone feel good about themselves.”

“Drinking coffee and ogling other men? You are in so much trouble,” Garrett’s deep voice boomed.

With a gasp, both women turned to see that Ellie’s Daddy had dropped in to see her and had obviously entered through the back door. He stepped into the front section of the cupcake shop and crossed his arms over his chest.

“Daddy! I didn’t see your car. I mean, I’m just having a drop of coffee. It’s mostly milk!” Ellie rushed to assure him.

“I dropped in to tell you I found a repair person to fix the broken oven this afternoon,” he informed her as he walked forward to peer into her cup. “I don’t want you here working extra hours to rotate cupcakes through one oven.”

“Thank you, Daddy,” Ellie said, slumping against the counter. She took another sip of the caffeinated beverage in her hand.

“How long before the next batch of cupcakes comes out?” he asked quietly.

“Fifteen minutes. Then a new batch goes in,” Ellie answered.

“I can take care of it,” Sue offered.

“You can’t do everything,” Ellie refused. “Customers are coming in all the time.”

The bells on the door announced a new flurry of eager shoppers. Ellie waved a hand at the visitors and greeted them with, “Welcome to Little Cakes.”

“You’re going to take a nap, Little one. I’ll take care of the cupcakes. Come on.” Garrett wrapped an arm around Ellie’s waist and guided her into the back.

Sue chuckled when he tugged the thick paper cup out of his Little girl’s hand and dropped it in the trash. She’d take care of everything out here. Smiling at the people oohing and aahing over the treats in the display, she hurried behind the counter to wait on the first person.

Hesitating in front of the door emblazoned with an image resembling DaVinci’s Vitruvian man sketch, Sue almost chickened out. She’d changed into a pair of yoga pants and a T-shirt at Little Cakes after her shift, but now her resolve to get started was evaporating.

You’ve really let yourself go, Sue. I definitely wouldn’t have asked you out on a date ten years ago if I’d known who I’d be waking up next to now.

Her ex-husband’s voice echoed in her head.

With a determined shove, Sue pushed open the door with enough force to bang it noisily against the wall. The sound ricocheted through the open space and everyone turned to look.