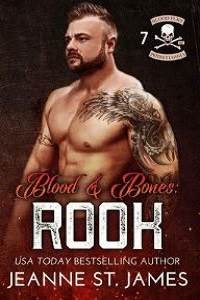 Randy sat behind the wheel of the 1974 Pontiac LeMans and stared through the windshield. The neighborhood was sketchy as shit.

While he didn’t expect a gated, luxury community, the shit-hole house surprised him.

He’d found the Baltimore address along with her name in scratchy handwriting on the back of a torn envelope buried deep in his father’s dresser drawer. Under a loaded .40 caliber handgun with the serial number ground off and a full box of ammo.

Randy wondered why those three things were kept in the same spot. Was Dutch planning on coming down here for a final reunion? Did he hate the woman that much?

He wouldn’t be surprised if his father did.

They weren’t allowed to speak her name in their house. Not since the day she walked out.

That was three years ago. When he was twelve and his brother Chris was eight.

Randy wondered if Dutch knew where she was all that damn time and never told them. Knowing his asshole father, he probably fucking did.

From where Randy had parked the piece of shit Pontiac at the curb, he twisted his head and studied the duplex through the passenger-side window. He had no doubt which one Bebe lived in.

The one with the rebel flag covering the front window.

One-by-one, he peeled his fingers off the steering wheel and gritted his teeth. He needed to get the hell out of the vehicle and go up to the door. He didn’t drive all this way for nothing.

He didn’t risk stealing the LeMans only for shits and giggles.

He was here now. He was doing this.

He was here to find out why.

Why a mother would just up and leave her sons. Never see them again. Never talk to them again.

Forget they ever existed.

He pulled a deep breath in through his nose, held it and blew it out his mouth.

The driver’s door creaked loudly as he forced it open. He had to slam it shut twice to get it to latch closed.

“Piece of fuckin’ shit,” he muttered, giving the door a good kick. He should’ve stolen a Corvette or something. However, this vehicle had been easy to pinch and he could start it with a screwdriver. It was why he picked it.

His goal was to get from Manning Grove to Baltimore and back without getting caught.

By his father or the pigs.

He rounded the front of the Pontiac sedan, dodged the garbage bags piled at the curb, strode over the cracked concrete sidewalk and up the porch steps. The storm door that used to hang on her side of the duplex now leaned against the siding. The screen was busted out like someone had punched it and the wood frame was splintered.

He hesitated for the few seconds it took him to take another deep breath before using the side of his fist to beat on the wood door with the peeling paint and no window or peephole. She would have no clue who was standing on the other side.

She would either answer it or she wouldn’t.

“Who the fuck is it?” came from the bowels of the house.

If he answered that question, she might not open the door. Instead, he pounded again. This time harder and louder.

“God-fuckin-damnit! Keep your fuckin’ pants on!”

A lock clicked and the door abruptly swung open with an ear-piercing creak.

And there she was. The woman who had pushed him out of her snatch a little over fifteen years ago.

His upper lip curled as he took her in.

Her dark blonde stringy hair had three inches of solid gray roots. She wore frayed Daisy Dukes that showed way too much skin for her age or body size. Her cottage-cheese thighs squeezing out of the bottom of the denim shorts reminded him of a popped zit.

She had on a threadbare T-shirt that told people to “Get Fucked.” The neckline had been cut out and sliced down the chest to show off her tits. Ones not contained by any bra.

As she stared at him, she squinted one dull blue eye when the smoke from the Pall Mall swirled into it.

She looked like hell. Way worse than what he remembered.

When both eyes narrowed on him, she yanked the cigarette from her mouth. Probably so it wouldn’t tumble from her lips when they gaped open at the sight of him on her front porch.

“Which one are you?”

Her gaze roamed from the top of his head down to his toes, then back up before she answered her own question. “Randy.”

Ding, ding, ding. You won the “Mom of the Year” award for recognizin’ your first-born son.

“Got tall,” she muttered.

Great to see you, too, Mom. He jerked up one shoulder. “Just in the neighborhood.”