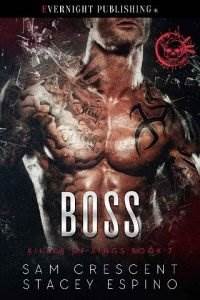 “I’ve been hit! Officer down. I repeat, officer down!”

Boss set his coffee down on the corner of his desk and rolled out his shoulders. He flicked on another monitor. He’d been following the drama for almost an hour. Normally, he wouldn’t pay attention to the police scanners or live stream if it didn’t involve one of his contracts, but the shootout was only two blocks away. It was past sunset and, with the streetlights out, the cops were night blind.

Although the police still had no clue what they were dealing with, he knew there were five shooters in different garages and backyards. Boss always had his finger on the pulse of the city. All five had serious firepower and were hell-bent on taking out as many cops as they could. Boss wasn’t sure what was up their asses, and he couldn’t care less. He stood up and strapped on a bulletproof vest and shoulder holster. He didn’t plan on using a gun tonight, but he always carried.

Everyone called Boss a monster, and they were right.

Tonight, he was feeling generous.

As he readied himself in his rear gunroom, he opened the door and mobilized one of his drones, complete with heat and motion sensors. Its gentle buzzing faded into nothing once he released it into the night sky. He’d keep control with his night-vision headset. Everything he owned was state-of-the-art technology. He used his hackers to do his dirty work, but Boss was a god behind the keyboard. He never ordered a man to do anything he wasn’t capable of doing himself—and that was part of Killer of Kings’ success.

Lately, he’d been slacking, rarely getting his hands dirty for any of his contracts. He missed the blood, the adrenaline, the thrill of the hunt. His hitmen were the best in the world—well-trained and extremely capable—but he wanted to handle a couple of hits himself this month. Hacking, research, and surveillance didn’t satisfy him on the same level as killing.

He was probably pushing fifty, but who the fuck knew. Becoming feeble and dependent on others was a deep-seated fear he rarely entertained. He’d rather eat a bullet than give up his power. So, he killed it in the gym five days a week and practiced technique and accuracy in his custom shooting range on a daily basis. No way was he going to let himself go or lose his skillset. But even the killer of kings couldn’t live forever.

He took a deep breath of the cool night air once outside. Boss made his way to the shootout, keeping to the shadows. He wore all black and had a lifetime of elite training behind him. Countless lights from the police flashers colored the sky as he neared the hot zone, and intermittent rounds of gunfire cut the eerie silence. SWAT couldn’t contain the scene. Numerous cops were already down, and it wasn’t safe for paramedics to move in for transport.

Minutes after reaching the site, he had all his targets accounted for. It was time to pick them off, one by one. It wouldn’t even be worth a phone call to get one of his hitmen to end this bullshit. Better for him to handle it himself before his coffee got cold.

He came up behind his first victim, wrapping a thick arm around the asshole’s neck. Within seconds, he secured his wrist, turning his own gun on himself. Boss leaned back just enough. One head shot, and it was a suicide. With the amount of media this shitfest would inevitably get this week, he didn’t want his stamp on any of it.

Unfortunately, he wouldn’t be able to use his own weapons tonight.

The pungent scent of sulfur in the air irritated his senses. A negotiator’s static voice sounded on the megaphone, asking the shooters to stand down. It only served to piss them off more. There were two in the next garage. Boss borrowed the gun he’d just used and struck the first guy right in the jugular. The second went in a frenzy, spraying the garage with lead, shrapnel pinging in every direction. He’d get him last because he pissed him off. After returning the gun to his first victim, he ducked down and crossed the street.

“They’re firing from everywhere. Does anyone have a visible?”

Boss continued to listen in on the police communication as he handled their shit.

The next two were shooting from behind some hedges. Anything that moved was a target. They had enough ammo to keep the party going on all night long.

What was the point of this bloodbath?

Boss’s curiosity was piqued when he saw the state of his next target. He looked like shit, his heat signature off the charts. He grabbed a metal rake leaning against the side of the house, breaking off the end of the handle with his boot. As soon as the shooter stopped to reload, he moved in and punched him straight in the neck. He immediately dropped to his knees, gasping for breath. Boss dragged him by the collar and rammed his head down over the sharp end of the rake, impaling him in the neck with the jagged wood. Blood gurgled from the wound and he collapsed to the side. Another unfortunate accident. Nice and simple for the police reports.