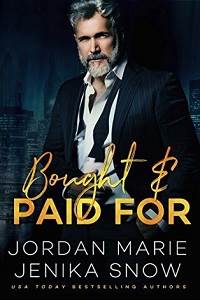 My heart was thundering, my palms sweating. I looked between my father and the man who was claiming he now owned me. I stared at my father, pissed that he would get himself into the situation, that he always seemed to fuck up on the most monumental levels.

He wouldn't even look at me and I knew it was because he realized how bad the situation really was. With his head downcast, his gaze refusing to meet mine, I could do nothing but want to lash out at him, hurt him in the way he was hurting me right now.

I knew in that moment that he would let Jackson King take me, own my body... fuck me.

“I'm not some piece of fucking property,” I almost screamed out. Tears of anger raced down my cheeks, and I felt my face heat.

And then, looking calm, collected, and like he had all the time in the world, Jackson King stared directly into my eyes and smiled. His grin had a chill racing up my spine, this cold sweat covering me, and I knew I should've been afraid instead of aroused.

Jackson King was older, hell, no doubt two decades older than my own twenty-one years, with a headful of short silver and grey hair, and a beard that screamed all man. His body was big, strong, muscular, and despite the situation, he made me feel very feminine.

“Your father owes a debt, and without any funds or any collateral to make up the loss, you're what I'll be taking as his payment.” He said those words as if the deal was already done, as if I had no choice in the matter.

I didn’t know what my father had done, or why this was happening, but I knew I’d find out eventually.

Forget the fact that I’d wanted Jackson King for longer than I could remember. I didn’t “know” him, but he’d been doing business with my father for years, and I knew enough about him through the media that it was like he’d always been in my life.

I could have snorted at the fact that I would assume to know who Jackson King was.

Ever since my father started doing business with him, I’d been fascinated by the man behind the three-piece suits and the billion dollar company. I knew he was ruthless in his endeavors, and that what he wanted, he took.

I just didn't think I would be the object of his taking.

I clenched my teeth together, my anger rising, my annoyance taking over. I stared right in his eyes, not about to back down no matter how intimidating he was.

“You can't make me go with you.” I felt pride over actually saying the words and knowing I had power too. “I’m not some piece of property you can own.” But the smirk he gave me, that arrogant, all-knowing expression, had this cold feeling rushing over me.

He took a step closer but I held my ground, refusing to back down. He might be powerful in the boardroom, maybe even dominate and dictate to everyone around him, but in this instance I would not bend.

I would not submit.

And when he reached out and tipped my head back with his finger under my chin, I knew there was something inherently wrong with me. The feeling of his flesh on mine, even that small touch, had me instantly wet. I felt my nipples beading, and my inner muscles clenching painfully.

He smiled wider, flashing straight white teeth, but it was more of a predatory expression, one that told me he knew he would get exactly what he wanted no matter what.

“That's where you're wrong, Megan.” He ran his thumb along my jawline, eliciting a shiver along my arms. “You'll give me what I want because you love your father, you don’t want to see him desolate and broken, and also because...” He leaned in closer so our faces were only inches apart. The scent of his cologne was addicting, and filled my head, making me dizzy, drunk from it all. “You’ll come with me because you want me as much as I want you.”

And just like that, after he spoke those words—those very true words—I knew I would do whatever he said.

I left with Jackson just an hour ago, my father's words before I left playing through my head.

“Jackson, we can work this out as men. My daughter does not need to be involved in this.” He sounded so sincere, so frightened over everything.

“It's okay, Dad.” I knew he had nothing to offer Jackson as payment. Although I just now realized that. Before Jackson came here demanding payment I just assumed my father had been stable, that he had money. Apparently I'd been dead wrong.

If I had been able to handle this with paying the debt off myself—sans using my body—I would have, obviously. But I’d barely finished my third year of college, and the jobs I usually worked at were minimum wage, and just for the summer.