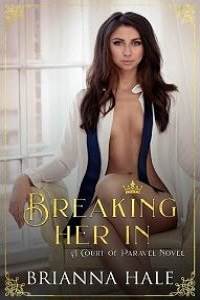 I dig my thumbs into my belt and glare at the suited man. Jakob Rasmussen, the King’s Head of Security and an all-around pompous dickhead. I move the toothpick from the left side of my lips to the right with my tongue, and stay where I am.

Rasmussen leans his knuckles on his desk, glaring at me from beneath heavy brows. “Bellerose. Your stables are only yours by permission of the King. I can have them allocated elsewhere within the hour.”

My eyes narrow. Prick. They’re my fucking horses and my fucking stables. My mother had the buildings constructed before she died, and they’ve been my home since before I was old enough to sit on a pony.

I hold the man’s cold gaze a moment longer, and then sit, propping my booted feet noisily on his desk. Bits of horse manure and straw scatter over the polished surface.

Rasmussen shoves my legs, and they hit the floor with a bang. “Is this how you dress when you’re summoned for official questioning at the palace?”

I look down at my faded blue checked shirt, jeans and scuffed boots. I shrug, speaking around the toothpick. “It’s how I dress to run my stables, which is what I should be doing right now. Get on with your questions. You’re wasting my time.”

I’ve had years of informants and People’s Republic tosspots sniffing around me, and I’m goddamn tired of it. I didn’t expect to have to put up with this under the monarchy, as well.

Then again, with a family like mine, I suppose I should have been expecting this.

Rasmussen sits down and makes a show of consulting his notes. As if he doesn’t know exactly who my father was. “Until the revolution, you looked after People’s Republic government’s horses. Is that correct?”

“Nothing gets past you,” I mutter, idly scanning the bookshelves on the other side of the room. My stables are the best and biggest in the capital, and, until two months ago, were home to twenty-odd horses, including Varga’s own black brute of a stallion, Onyx. The Chairman didn’t ride for the last few years of his life, though. Too busy, was the official line from the People’s Republic Party. Too paranoid and ill, more likely.

Now, my stables are almost empty. None of the First Families seem to want to be associated with the stables where Varga kept his horses, which means I’m fucked.

His eyes flicker, as if he’s suppressing the urge to reach out and hit me up the side of my head. He’s a big bastard of a man, with a mean, hard mouth. If he were a horse, I’d castrate the fucker and sell him. Any horses bred from his line would be bad news.

“Are you in favor of the revolution?” Rasmussen asks.

The one that put King Anson on the throne. I draw the toothpick from my mouth and examine it. “I thought it was noisy. My horses didn’t like all the shouting.”

“Were you at the palace the day the King announced that the People’s Republic was over?

I know it will sound good if I claim that I supported the revolution, but I don’t give a rat’s ass about sounding good. This is supposed to be a free country now. “I was busy.”

I stare at the man like he’s an idiot. “Looking after my horses.”

My jaw tightens on the toothpick. Boy. I’m twenty-six, and the man addressing me can be no more than thirty-five. He thinks he can walk all over me just because of his position. If this is the Paravel that King Anson is creating, then he’s going to find his throat slit just like his parents. “The upper class is reverting right back to the old values, I see. Or those who like to imagine they’re in the upper class.”

Rasmussen’s face suffuses with anger. I know his family. Rasmussen drove a delivery truck, and so did his father. He came from a long line of common-as-dirt truck drivers, so how he managed to secure such a prestigious position at the palace, I have no idea.

I gaze around the office. Dark wood paneling. Oil paintings. Leather-bound books on display. It’s real nice, if you like that sort of thing, but he’s still a nobody. Maybe he fancies himself as a lord and has his eye on a posh lady. These people with their greed and pretension and hypocrisy. Wild horses couldn’t drag me into the Court of Paravel. Not in a million goddamn years.

Rasmussen makes a note on the papers in front of him. I suppose it’s my security file. “Given who your father was, I would have thought you’d want to distance yourself from anti-royal sentiments.”

“Don’t see the point. I never knew my father.”