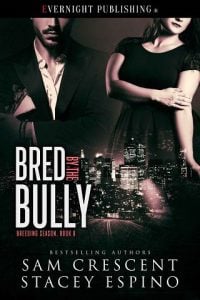 Mira Davencourt knew he was doing this on purpose. Drake had told her to meet him at twelve o’clock on the dot. Now it was twenty minutes past. His PA kept on smiling at her, saying he’d only be a minute. She took a deep breath and flicked a blonde lock back. Her nerves were at an all-time high.

In and out, she tried to use her yoga breaths. She wasn’t very good at yoga, even though she’d been doing it for nearly a year. If anything, her body was much more limber. She’d yet to lose much weight, but she wasn’t one for cardio.

Why am I thinking about exercise right now?

She hated being here.

Mira hadn’t seen this man in such a long time. Drake had made her life at school a complete misery.

She didn’t understand why her brother would do this to her, but this was about family. Ever since their father died, Nigel had been trying to make the pawnshop pay for itself. The biggest problem was neither of them knew anything about rare goods. Nigel had invested good money into products that had absolutely no value. He took unacceptable risks. Then he had to go and get a loan from none other than Drake Eastwood. The man who’d bullied her throughout high school, who was one of the worst men in the city to even be around.

I can do this.

She’d gone to the shop to talk to Nigel about letting the pawnshop go, only to find the place smashed up and her brother with two broken legs. If he didn’t pay a large sum of money to Drake by the end of the week, his hands would be next. They’d keep breaking things until there was nothing more than his neck to snap. This had happened on Monday.

So, on Thursday at lunchtime, the only available slot Drake had, she sat waiting to talk to him. She had no idea how she was going to do this. They owned nothing of any value. The pawnshop was so deep in debt that selling it would cause them to owe even more money. Their father’s legacy had turned into a hinderance.

The migraine that started the moment she found her brother had gotten worse to the point of making her sick. She couldn’t stomach food. Nigel had tried to play chipper, like he was in complete control, but she knew differently. Once they finished with her brother, the debt would belong to her.

No matter what her brother tried to do to protect her, he couldn’t save her.

Taking a deep breath, she tried not to think about everything that would be lost. She knew her father had loved his pawnshop, and he’d had an eye for antiques, but it had missed her. She’d moved from job to job over the past ten years. She’d been a barmaid, worked in a bakery, a travel agency, and many other places. Right now, she worked as an accountant. The hours were odd, but the money was good.

She really thought she was happy, but now her brother was taking all decisions out of her hands. No matter what she earned, she couldn’t cover the six figures he owed Drake.

After forty minutes, she was tempted to leave and even stood to go, but suddenly, the door to Drake’s office opened. She expected him to be alone, but out came three men, all of whom shook his hand.

On the outside, he looked like a suave businessman, but she knew the truth. Not all of his businesses were legal. Nothing could be pinned to him, but his name sent fear through everyone.

His dark-brown gaze captured hers. He tilted his head, but she didn’t complain, nor did she give away her annoyance at being kept waiting.

“Miss Davencourt is here to see you,” his PA said.

“Certainly. No interruptions, Glenda.” He held his door open.

Do not go in there.

All it took was one thought, Nigel, to get her moving. One step in front of the other, she entered his office, walking toward the single chair in front of his desk.

Where had the other two men sat?

Did he remember her? Their school days had been a long time ago.

She watched as he rounded his desk. His suit jacket fit him snuggly, showing off his broad shoulders. As he sat, the flex of his muscles gave away how strong he actually was. The man worked out. At the cuff of his jacket, she detected the merest hint of ink, but she couldn’t make out what it was.

She clasped her hands tightly together, hating how nervous she suddenly felt. This wasn’t good. Drake didn’t have any control over her, not really.

“I’m here to talk about my brother.”

Drake leaned back in his chair, the tips of his fingers pressed together. “What about Nigel?”