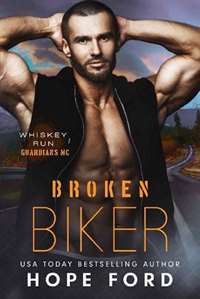 He says he’s broken, but I know I’m the missing piece.

My marriage is a sham. I know it, everyone knows it. But when my husband–the congressman–is found murdered, I’m the first one accused.
Now, I’m on the run with only my designer purse and high heels to my name. All I want is to clear my name. I have no one to ask for help, still help shows up in the form of a hot, tattooed biker who claims to hate women.
I don’t expect him to believe I’m innocent. I don’t expect him to protect me at all costs. I definitely don’t expect to fall in love.
He says he’s broken, but I know I’m the missing piece.

The announcement over the speaker on the bus has me looking around at the empty rows behind me. I am the only person left. I’m definitely not a mastermind when it comes to trying to get away without being noticed. Most people go to big cities when they don't want to be found, yet here I am arriving at probably the smallest town in Tennessee. It's not really my fault, though, and I know I should be a little bit gentler with myself. The last couple of days have been pure hell, so of course I’m not going to be completely on my game.

When I bought the ticket, I gave them almost every dollar bill I had and told them to take me as far as I could get. Little did I know that almost a hundred dollars would only get me two hours away from home. Left without a choice, I stand up and pull the strap of my purse across my body. I don’t have a lot of options yet, and I need to make the best of it.

I thank the driver and climb down the steps of the bus. There's a big sign in front of me, Whiskey Run, home of Blaze Whiskey.

Damn, I could definitely use a drink about now. I look to the right, and there's not much in that direction, but when I look to the left, it seems to lead me to the middle of town. I take off walking, ignoring the pain in my feet from my high heels. When I left my house today, I had no idea that I’d basically be running for my life.

As I get into town, I notice a bar and a sign that says Whiskey Whistler. The open sign is off, but I try my chances and pull on the doors, but they don’t budge. After a quick look at my watch, I figure, of course, it's not going to be open at 10 in the morning, especially in small town, USA.

I walk past the bar and come up to a restaurant with a sign that says Red's Diner. Looking in the big windows, I see that there are a few people at the tables while a woman with long red hair walks between them, talking and laughing. Just looking at her brings a smile to my face. She looks friendly and has a contagious smile. If nothing else, I can grab a bite to eat with the change in my purse and try to come up with a plan. Hopefully, one that doesn’t have me sleeping outdoors.

I pull open the front door and walk in. The woman with the red hair instantly greets me and points me to a corner booth.

I go over and sit down, opening my purse to see what change I have. After a quick count, I see that I have roughly $4. I look at the menu and decide I should probably stick with a cup of coffee or something with sustenance, but when I see the advertisement for the apple Blaze cake, I know I can't pass it up.

I smile up at her. "Hi, I'm Allison," I say and shake my head. Maybe I should have stuck with a fake name. Oh well, too late now.

She laughs and takes the menu that I hand her. "It's going to be one of those days, huh?"

I nod in agreement. "Definitely one of those days."

"It'll be right out." She almost skips away from me over behind the counter. I take a look around at the other people sitting down at tables, and they’re all watching me even if they’re trying to act like they’re not. I’m sure they’re trying to figure out what the outsider is doing here in their town.

As Violet approaches, I take my eyes off the other people and look down at the table. Violet sets the cake down and then takes a seat in the booth across from me. "So are you new in town?"