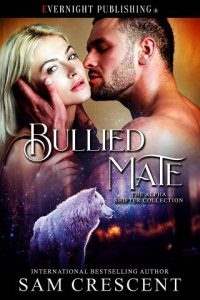 Life is so unfair.

The first time Poppy transitions, she finds out her mate is none other than Klaus freaking Demon, the alpha’s son. The guy who’s been secretly bullying her for years. If he thinks she’s going to fall for him, he’s wrong.
Klaus apologizes, so what more does she want? They’re mates, and there’s no way she can deny this connection. She wants nothing to do with him, but she belongs to him, and he can’t allow her to leave. When a visiting pack full of unmated males comes to town, Klaus knows he’s screwed. While he still tries to make Poppy see sense, the visiting alpha’s son takes a shine to her. Klaus can’t stand to see Poppy with another, and it’s time he steps up—even if his dad will find out about the bullying.
Will Poppy give him a chance or push him away? Klaus isn’t sure how he could handle the rejection. Can he allow her to be happy with another, or will he admit to what he’s done and stake his claim on his mate?

“What exactly do you want from me?” Poppy Davenport asked. She stared at the alpha’s only son, and anger filled her. She had never felt this way about anyone else. Klaus Demon was a nasty piece of work, and she … hated him. He was cruel, manipulative, and just horrible.

The fact that on her first transition, which was a grand whole eight months after his, he discovered that she might, by a tiny slither of possibilities, be his mate, was just ridiculous. What was more, he wouldn’t leave her alone. This had been three days ago.

In the past three days, she’d seen more of Klaus than she ever cared to.

“You know what I want from you, Poppy. Stop being a fucking jerk already.”

She spun around to face him and glared. “I’m being the jerk?” She pointed at her chest. “How do you figure that out?”

“Why haven’t you told anyone?” Klaus asked with his arms folded.

Poppy continued to glare at him. The more time she spent in his company, the more she disliked him. She’d spent over a decade trying to avoid him.

“Why would I tell anyone?”

“Why not tell anyone? Come on, this is a big fucking deal.”

She gritted her teeth and counted to ten in her mind. This guy. He thought because they were in some way mates, he believed she’d be happy. No one had seen them three nights ago. The way their wolves had been connected—it was this instant, undeniable attraction. It was fucking scary just how strong that instant hit of lust had been. Poppy hated it. She knew who Klaus was, and it hadn’t taken her long to realize what all of this actually meant.

Her bully, the guy who made her life hell at school, throughout the pack, and just any chance he got, was her mate.

She hadn’t told her mother. No other pack member, certainly not the alpha.

The alpha was known for his traditions, and he believed that mates should be together. If he knew the truth, there would be a ceremony, and she’d be with Klaus for a period of time. The alpha always asked his people to give their mating a chance.

“How is this a big fucking deal to you, Klaus?”

“You’re my mate. After all this time, we’re in the same pack. There’s nothing dividing us. We have found one another, and we both know that shit is rare.” He looked so excited.

The truth was, she was utterly disappointed.

“Poppy, the whore’s daughter. Fat Poppy. Fat Poopy. Look everyone, duck and cover, Fatty’s in the room. Whore. Slut. Bitch. Ugly cow. Do you need me to go on?” Poppy asked.

The name-calling had started when she was young. Mainly because of her mother, who wasn’t a bad person. No, her mother, Anna, was complicated. Her only mate died many years ago, when Poppy was a young girl. So young that she didn’t even remember being near him or enjoying the experience of being a daddy’s girl, or having a father in her life.

From what she remembered, her mother had mourned. For a long time, the full moon would be a painful experience for her only living parent.

Poppy recalled sitting at her window each full moon and hearing the painful howls of her mother. Knowing deep in her heart, that her mom, even in wolf form, was crying. That deep-seated pain had never gone away.

Until one day, she found comfort in one of the unmated men. Then another unmated man. There was never any constant lover or boyfriend. They were never married or mated. The men who were with her mother enjoyed a casual hookup. Of course, the pack knew of it, and it caused trouble for Poppy at school.