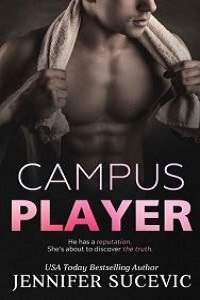 “Morning, Demi!” Gary, one of the stadium custodians, calls out with an easy smile and wave as he saunters toward me. “Up and at ’em bright and early this morning, I see.”

My heart jackhammers beneath my ribcage from the twenty-minute run as I flash him a grin. “Always!”

“You have a good one! I’ll see you tomorrow!”

Since I’ve already moved past him, I holler over my shoulder, “Same place, same time!”

Even with The Killers pumping through my earbuds, I almost hear the deep chuckle that slides from his lips. Our morning greetings are a ritual three years in the making. I’ve been running through the wide corridor that leads to the stadium football field since I stepped foot on campus freshman year. This will be something I miss when I graduate in the spring. Five days a week, I’m up at six, logging in a four-mile run before returning home, jumping in the shower, and heading off to class.

At this time of the day, the stadium is still relatively quiet, with only a few people wandering the hallways. There’s something both serene and eerie about it. I’ve been here on game days when there are thirty thousand fans packed shoulder to shoulder, rooting on the Western Wildcats football team. Three-fourths of the stadium filled with black and orange is an amazing sight to behold. Football is a religion at Western. Unfortunately, the same can’t be said for the women’s soccer team. We’re lucky if there are a couple of hundred spectators in the stands.

I keep my gaze trained on the light at the end of the tunnel and push myself faster. As soon as I burst out of the darkness, bright sunlight pours down on me, stroking over the bare skin of my arms and shoulders. It’s late August, and summer is still in full swing. A whistle cuts through the silence of the stadium, and my gaze slices to the field. Nick Richards has been head coach of the Wildcats for the last decade. He also happens to be my father.

Two days a week, the guys are up at six in the morning for yoga. Dad is a big believer in flexibility. Even though I’m winded, a smirk lifts the corners of my lips. Watching two-hundred-and-eighty-pound linebackers contort their bodies into Downward-Facing Dog, the Warrior II Pose, and the Cobra is enough to bring a chuckle to my lips. Some of the guys actually like it, but most grumble when they think Dad isn’t paying attention. Little do they know that he sees and hears everything.

My father catches sight of me and flashes a quick smile along with a wave in my direction. He has a black ball cap pulled low and aviators covering his eyes. There’s a clipboard in one hand as he paces behind the instructor.

When I point to the field, he shakes his head. He might make the guys do yoga, but he refuses to participate. Something about old dogs and new tricks. Every once in a while, I’ll tell him that he needs to get out there and set a good example for the team. He usually shoots me a glare in return.

Every Wednesday night, Dad and I get together. Our weekly dinners became a thing when I moved out of the house and into the dorms freshman year. He’s busy coaching football, and my schedule is packed tight with school and soccer. Getting together once a week is the best way for us to stay connected. It doesn’t matter if we’re in the middle of our seasons; we always make time for each other. Especially since Mom lives in sunny California. After eighteen years of marriage, she got fed up with being a distant second to the Western University football program. She packed up her bags and walked out. I hate to say it, but Dad didn’t notice her absence for a couple of days. Which only proved her point. Now she’s remarried, learning to surf, and is a vegan. I visit for a couple of weeks during the summer before soccer training camp starts up at the end of June.

Even though it’s only the two of us, our weekly dinners are set for three people.

I tell myself to stare straight ahead and not glance in his direction.

Don’t you dare do it!

My gaze reluctantly zeros in on him like a heat-seeking missile. Long blond hair, bright blue eyes, sun-kissed skin, and muscles for miles. And he’s tall, somewhere around six foot three.

I’m describing none other than Rowan Michaels.

Otherwise known as the bane of my existence.

My dad discovered the talented quarterback the summer before we entered high school and took him under his wing. Which has been...aggravating. In the seven years since, Rowan has become an irritatingly permanent fixture in my life. He’s the brother I never wanted or asked for. He’s the gift I wish I could give back. He’s the son my father never had but secretly longed for.