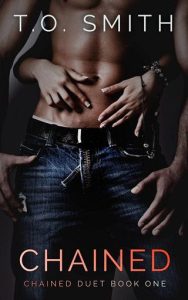 My life was a series of tragedies. The kind that I thought I could never heal from.
And when he’s ripped away from me, I’m left empty and hollow. I’m left with more guilt than any human being should be forced to cope with.
There was no hope for me.
Perhaps I was destined to fall from the very beginning.
. . . Until him. Until he saved me.

**PLEASE BE AWARE: This is not your normal kind of second chance romance. Guaranteed HEA. Book is a bit twisted, so you have been warned.**

I glared up at the clock hanging on the wall as it continued its annoying and incessant tick-tock, tick-tock sound. I’ve been sitting in the same chair in the same hospital waiting room for hours. I had honestly lost track of the amount of time I had been here.

My best friend was lying in a hospital bed in one of these rooms—they wouldn’t tell me which one—with a gunshot wound to her shoulder.

“Can you tell me anything?” I had begged the nurse when he had come to tell me that they were doing all they could for her.

“It’s critical.” That was all he had said. No real information. Nothing on whether they were optimistic that she would live or that they feared she would die.

So, I’ve been sitting in this waiting room, trying my hardest to wait patiently for some kind of news. Lacie—my best friend—was the only person that I had left. Being a foster kid all of my life, I had never had someone I could rely on.

Even my ex had managed to destroy me.

No one had ever truly cared about me—except for her. So, I couldn’t lose Lacie. I would be completely alone.

I immediately jumped to my feet and looked toward the door that I had heard slam shut. My eyes locked on the surgeon that had been operating on Lacie as he made his way over to me.

Honestly, could he be any slower?

Nerves were making me jittery, and I danced from foot to foot. I needed to know how Lacie was doing, if she made it, if she was going to live.

“Miss Jones, we tried to save her—" I immediately stopped listening to him after that and turned away. I forced myself to blink back the tears. It was so obvious what the doctor was saying.

Lacie hadn’t made it.

That bastard shot her, and she didn’t make it.

I lost my best friend because of some psycho hell-bent on ruining her life.

I turned back to him after I managed to collect myself enough to deal with the situation at hand. “Can I see her?” My voice was hoarse, evidence of the tears I was struggling to hold back clear in my voice.

But I didn’t have time for all that now. I could break down and cry later—even scream about how unfair God was.

The surgeon simply nodded his head and told me what room and on what floor I could find her. I rushed to her room as quickly as possible, but when I laid my palm on the door handle, I couldn’t bring myself to open it immediately. I was afraid of what I would see on the other side of the wooden, brown door once I opened it. I didn’t want to see what I knew I would. I didn’t think that I could handle the sight of it.

I drew in a deep breath, however, and forced myself to turn the handle down and push open the heavy door. I didn’t step in; I just stood there, taking in the white, sterilized room. I was taking my time observing everything I could before I decided to lay my eyes on her.

It was a normal hospital room, much like the one I laid in for months after overdosing when I had broken things off with Damien four years ago. A flat-screen television hung on the wall across from the bed, and there were two hard-looking chairs sitting next to each other against the wall under the window.

I slowly let my eyes move over to her heart monitor and IV drip. It was all turned off, considering the fact that she was dead. She didn’t need them anymore.

I felt tears brim my eyes. Before I could bring myself to force them back, my eyes landed on Lacie. She was deathly still and pale. Her arms lay out straight against her body, her palms flat on the mattress beside her thighs. Her hospital gown was a baby blue color, so light that it was almost white, and almost blended in with the sheets that covered her up to her belly.

I stepped a little further into the room, a couple of tears slipping out of the corners of my eyes. Anger towards the man that did this to her and sadness at the thought of her no longer being a part of my life gripped my heart, making me feel as if it were constricting. My chest was tight with emotion that I didn’t know how to handle. I wanted to hit something, but at the same time, I wanted to lock myself in a room by myself to scream and cry.