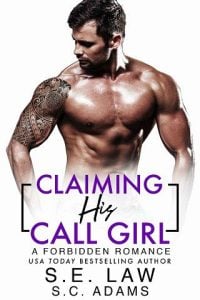 The young guy behind the bar with a messy blonde man bun and blue flannel shirt nods and scurries forward. Hell, I have nothing against man buns. So long as my beers are cold and the nuts warm, then he could dye his hair pink and tuck a daisy in his bun for all I care.

I look around, leaning back against the scarred wooden slab. Patsy’s is a dicey country saloon that’s been re-done with some modern flourishes. It’s also old as hell, and illegal as hell too. I swear, there are ashtrays on every table and people sucking deep on their Juul sticks without their masks on.

But I like it because Patsy’s is a part of New York you don’t see in movies or TV shows. The only people who visit are folks who know how to mind their own business, and as a cop, that’s important to me. I don’t want to be busting out my handcuffs at every turn. Plus, sometimes we boys in blue just want to relax and blend in, like everyone else.

At that moment, my buddy Curtis strolls in, and sees me. I raise a hand, and the tall man comes over.

I nod as the bartender returns with our drinks.

“Not much. How are you?” I ask, sliding over one of the Buds.

He sits his huge mass on a hard wooden chair and winces.

“What the fuck is up with these stools? Do they find the hardest wood in the world to make these things? I swear, my ass always hurts after a night at Patsy’s. But I’m good. Nothing to report. You know how it goes in the city. Same old, same old.”

We both smile grimly because nothing could be less true of New York. If anything, this city eats its young by swallowing them alive. But then Curtis takes a swig of his beer and shoots me a level look.

“So, any progress on your newest job?”

I shrug and then look around to make sure no one’s listening. After all, we’re both undercovers for NYPD, and it’s a tough life. But it makes sense for single guys like us because we have no family, and not even many friends to speak of. No one’s going to freak out if we disappear for a few weeks or months before resurfacing.

“I’ve got a few promising items on the horizon. Actually, I’m heading over to Club Z after we’re done here.”

Curtis throws me a knowing smile because fuck, we both know what Club Z is good for. The place is a den of sin but there’s a method to the madness, for us at least. Sometimes, the best way into a gang is through the girls, and certain female entertainers seem to have all the hook-ups. Even if they don’t, they often hang out with our real targets, and those guys aren’t exactly the most discreet people. They’ll blab ridiculous information with a girl perched in their lap, and as a result, we frequent Club Z to try to make connects with potential honey pots.

“You got a specific mission tonight?” Curtis asks, one black brow rising.

Twisting my beer bottle in my hand, I take another swig and nod.

“Yeah, and we’ll see what happens. I heard there will be Russians, but that remains to be seen. You know how it is with the Russians too. They vet everyone in their circle high, low, and up the ass, so I’ve got to keep it straight if I want to get in with those dudes.”

“Have you gotten an invite to that party out in Long Island yet?”

I know what he’s talking about. The mafia that we’re hunting has a stronghold in Long Island where allegedly, girls are put up for sale. It’s a dirty business filled with innocent young things who are starved and beaten before they’re “prettied up” for auction. But we’re going to put a stop to it all. We’re going to breach that fucking nest of snakes headed by the Sim brothers, and bring those sex traffickers in for the true punishment they deserve.

“No, I’m not in yet. But we’ll see what happens because I’m expecting an invitation any day. Maybe one of the girls from Club Z will get me in,” I drawl.

“Hell, I wouldn’t be surprised if a couple of them are already in tight with the targets. Wouldn’t hurt to have an accessory with you if you do get invited out to Long Island,” he hints.

I nod because my buddy’s not talking “accessory” like a hair accessory, or an accessory to murder. Instead, these assholes often have “pets” with them, meaning sexy, nude women who trail behind the mafiosos like well-bred kittens. If I had one with me, it would lend to my street cred, and yes, Club Z has a couple girls who’d likely play the part beautifully. But I just shrug.