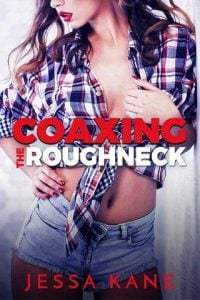 What am I supposed to do with an oil rig?

I stare open-mouthed at the lawyer who is telling me I inherited this complicated island of machinery in the middle of the Gulf of Mexico, but I’m only catching every third or fourth word he’s saying, because the helicopters arriving and departing outside are so ungodly loud. Carrying away the rig workers in threes.

Your father left you the rig in his will.

There’s no money left to keep it operational.

My pulse starts to clamor. When did it get so hot in this office? I shrug off my flannel shirt and tie it around my waist, glaring at the lawyer when his gaze falls to my breasts, staring at them greedily through my white tank top. “If the rig can no longer operate, what am I supposed to do with it?”

“Sell.” He says this like it should have been obvious, when I’ve never been on this oil rig in my life. Nor do I know the first thing about the drilling industry. “Your father’s expedition company was the smallest around. He did his best to remain competitive, but the big boys have nine, ten rigs. Your father only had the one.” He pulls out a handkerchief and dabs at his upper lip. If he wasn’t a pervert I might feel some sympathy over him wearing a suit in this heat. “One of the larger oil companies ought to take it off your hands for a pretty penny.”

My antenna goes up. A pretty penny?

A series of images flashes through my head. My cramped apartment above the bar in New Orleans, complete with clanging pipes and earsplitting music at all hours. My stack of overdue bills, including one year of student loans, all I have to show for my failed attempt at college. And lastly, my ancient, pitiful lawnmower that only works if the temperature outside is between seventy and seventy-five degrees. I can’t even afford to replace the blades on it. I can barely afford rent.

If I make money off the sale of this oil rig, I could buy new tools for the landscaping business I’m trying to get off the ground. I could afford to advertise and even buy a new truck to haul everything around to jobs.

“How much will one of these big companies pay for a rig?”

The lawyer shrugs, looks out the window of the office to consider the upper deck of the rig. “It’s on the small side, definitely in need of some repairs and improvements.” He jerks his chin at yet another helicopter departing into the blue sky. “You’ll have to deliver it free and clear, no active payroll. Shouldn’t be a problem. When the roughnecks heard your father had died, they started looking for employment elsewhere.”

“I am sorry about your father, by the way,” he murmurs, sidling closer. “You look like you could use a shoulder to cry on. And I’ve got two right here—”

“Take one step closer and you might have two shoulders, but you’ll be down a testicle,” I say, smiling with teeth.

The lawyer huffs a laugh. “It’s possible that you’re more like your father than I originally thought.”

A fissure forms in my throat, spreading all the way down to my chest and I have to look away. “Well, we’ll never know for sure. I haven’t seen him since I was twelve.” Refusing to give in to the encroaching self-pity, I straighten my shoulders and focus back on the problem at hand. “How much is it worth, please?”

“It’s still capable of producing.” He shrugs. “You could ask for at least a few hundred thousand, I’d say.”

The beignet I had for breakfast is jumping on my stomach like a trampoline.

Of course I am. Things like this don’t happen to me. I’m broke as a joke and it has always been this way. Scraping by is what I do. I don’t get calls in the middle of the night from an expensive lawyer telling me I’ve inherited a valuable oil rig.

“Wow.” I slump sideways against the metal desk, upsetting the nameplate bearing my father’s name. “Oh wow. This is incredible. Yes, I’d like to sell it. As soon as possible, please.”

“Great.” He’s looking at his phone now. “Let me know when you have a buyer and I can handle the title transfer. Right now, I have to run.”

“Yes.” He runs his tongue along the inside of his bottom lip. “Unless you want to reconsider that shoulder to cry on—”

“Right,” snorts the lawyer, striding to the doorway, already pressing his phone to his ear. Dismissing me. “Oh wait. I forgot to tell you something important.”

“If you want to sell this rig, you’ll have to find a way to make Butch leave.”