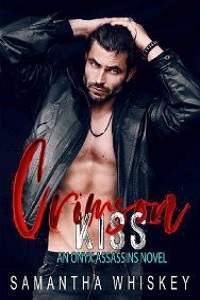 Every muscle in my body hurt, but that was nothing new. Pain had been my constant companion for as long as I could remember—which was a long fucking time—but the past few weeks had taught me all new depths to agony I was capable of feeling.

Hunger gnawed at my stomach with the same ferocity as the nausea that kept me from feeding. The last attempt had only resulted in a mouthful or two before my stomach turned traitor, and the worst part was that everyone was in my fucking business. Alek. Lachlan. Ransom. Benedict. Hell, even Ajax had been on my ass about feeding. What the hell did they want from me? It wasn’t like I hadn’t tried.

I balanced the tray containing Avianna’s repast in one hand and knocked on her door with the other. Apples, slices of perfectly cooked Kobe beef, fluffy mashed potatoes, tender young broccoli, and three different varieties of cupcake graced the plate. I’d picked out her favorite foods, hoping to tempt her to eat a little more. There was even a bag of O-negative if she didn’t want to leave the room to feed.

Now if I could only get her to speak.

“Come in,” Olivia answered, and I twisted the handle, pushing open the heavy door that led to Avianna’s suite of rooms in the royal wing of the manor.

It didn’t matter how many times I’d been in this room, the scent of jasmine and lemongrass almost took me out at the knees. Maybe it was her royal blood, or maybe aristocrats like Avianna liked to bathe in obnoxious, expensive concoctions, but holy fuck did she smell good.

Gripping the tray with both hands, I kicked the door shut with my foot. The thing was made of steel—my boots weren’t about to damage it. The space might look frilly, but it could take a beating.

Kind of like the female who sat tucked into the corner of the couch, her black gown covering the legs she’d bent under her, her cerulean blue eyes meeting mine for a flash before she jerked her gaze away.

There were no words for what the sight of her did to me. I’d never been a big fan of emotions. They were messy, complicated, and got in the way. Numb and apathetic was my preferred state, but Avianna always managed to wring every emotion out of me with nothing but a glance.

A glance was all I was good for when it came to her.

Joy, that she’d somehow made it home after the twins, Saint and Samuel, had kidnapped her a month ago.

Rage that they still walked the earth, unpunished.

Wonder that beauty like hers existed in a world that had only shown me death.

Frustration that no matter how hard I tried, no matter how many times I’d apologized for not tracking her down that night, she still wouldn’t speak weeks after her return.

Envy for whatever man might actually be able to touch her one day.

Exasperation that she wouldn’t do what her brother, the king, asked in order to keep herself safe.

But all of that was manageable, really, as long as I kept a firm leash on it.

But it was the hunger that damn-near overwhelmed me. My gaze flickered thermal, as though she were the prey I needed to devour in every possible way.

Get the fuck over yourself.

I blinked and brought the room back into focus.

“I’m here,” I parroted like a fucking idiot, glancing over to the small dining area that filled a corner of the room.

I liked that Avianna had decorated her rooms—scratch that—this room in blues. Every shade covered the space, from the softest powder blue to cobalt and turquoise. It had always reminded me of a peacock. As for her actual bedchamber...well, that was beyond the farthest door, and beyond my knowledge.

I intended to keep it that way.

“Where would you like it, Avi?” Olivia asked, a hopeful note in her voice.

Of course, she wasn’t going to speak. Whatever they’d done to her in the weeks of her captivity had rendered her silent. I clenched the tray as wrath streamed through my veins, looking for any outlet to avenge what had happened to her.

“Right,” Olivia said with a sigh, giving me a wide berth as she passed by, not that I could blame her. A few centuries of being a standoffish prick had rightfully earned me a reputation for being...well, a prick. “You could have asked Prudence to bring it up, you know,” she said softly.

“Figured you could use some time with Ransom,” I answered. It would have been easier to send Avi’s talem with her repast, but I hadn’t. I’d hand-delivered every single meal since she’d returned.

“Thanks for that.” Olivia offered me a smile and shut the door on her way out, leaving me alone with Avianna and the cursed silence that had come to be her trademark in the last couple of weeks.