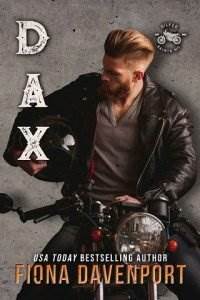 “Can I have the floor for a minute?” Nova asked. He was leaning against the pool table with one hip, his arms were crossed over his chest, and his eyes held a deadly gleam.

Damn, he was pissed as fuck about something.

Mac gestured for him to step up, then took Nova’s place at the pool table.

“My sister is coming to visit for her spring break.” Nova’s dark eyes slowly scanned the room, the warning in his expression crystal clear. “I know it goes without saying, but I’m telling you all anyway. Stay the fuck away from her. She’s off-limits. If any of you puts even a single finger on her, be prepared to lose it...and your balls.”

I rolled my eyes. “She’s like fifteen, bro. Some of these jokers may be hard up because they’re so fuckin’ ugly, but none of us are that stupid.”

Nova threw me a dirty look, making me grin in return just to fuck with him. “You had your head up your ass the past couple of years, Dax? You’ve met her every year when she stays with me for her break. She’ll be eighteen in a couple of months.”

I shrugged. She was still just a kid. What did it matter if I didn’t remember her age?

“That all?” Mac asked. Nova nodded, and our prez dismissed everyone.

Breaker, who’d dropped onto the comfy leather couch next to me at the start of the meeting, leaned over. “Would you even recognize that she’s a woman, dude? Pretty sure your bed springs have frozen from not being bounced on in…” He stopped and scratched his head as if contemplating, then he smirked. “Wait, are you a virgin?”

I grunted and cuffed him on the back of the head before jumping to my feet and stalking out of the room. Breaker might have been joking, but he wasn’t all that far off. I’d never been big on casual sex and had lost interest in relationships years ago. I honestly couldn’t remember the last woman I’d been with. It didn’t bother me, though. If the right woman came along, that would change, but I was content with my life even if it never happened.

Besides, there were enough love-sick brothers around here to make me confident in my choice to remain alone. I did have to admit, though, the babies were fucking adorable, and Uncle Dax had no problem spoiling the shit out of them.

“Uncle Dax!” Speaking of the little midgets, Molly—Mac’s oldest daughter—came running down the hall, and I grabbed her up seconds before she crashed into me. She was a little thing, like her momma, but even at eight, she was just the right height to hit me in the crown jewels if she lost her balance and skidded into me. It only took a couple of times of being curled up on the floor in the fetal position with my brothers laughing their asses off for me to learn to catch her first.

Bridget sighed as she caught up to her daughter. “Sorry, we still haven’t been able to curb her tendency to run full steam ahead without thinking.”

I grinned and threw my little bit in the air, making her shriek with laughter. “I hope she never changes,” I declared with a wink at Molly.

“I’m so excited! Mommy said my new friend will be here in two days, and I gets to show her around the clubhouse!”

I looked at Bridget, confused. We rarely allowed people who weren’t patches, prospects, old ladies, or someone who needed our protection in our clubhouse. Did Molly mean that she was going to give the friend a tour of her house? It was attached to the back of the building, so I could see how she would have misspoken.

“Nova’s sister is arriving in the morning on Saturday, and he won’t be back from the run until late. He asked me and Molly to keep her company,” Bridget explained.

“Makes sense,” I agreed. “Nova needs you to be her bodyguard, huh, little bit?”

Molly’s chest puffed out, and she gave me a cute glare as she did a decent jab to my chest. “Totally. I’ll keep all the drooling bastards away from her!”

Bridget gasped while I choked and coughed from holding in my burst of laughter. Molly started pounding me on the back with an overly concerned frown.

“Jared Mackenzie!” Bridget shouted as she stomped toward the hallway that led to the prez’s office. Glancing back over her shoulder, she asked, “Can you watch Molly for a few minutes?”

I nodded because I still couldn’t speak. “I got this, Mommy,” Molly announced confidently.

And that was how the big, badass biker called Uncle Dax ended up skipping around the clubhouse pretending to be a noble steed carrying his princess.