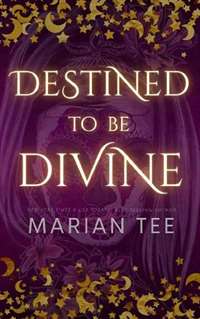 Today’s lesson from the divine:
SPIDERWORT. These flowers crawl and creep without a scent, but a message of temporary happiness they still carry, and against it even primordial gods are unable to defy.
It is a truth universally acknowledged, that a human girl who dares to think she is loved truly by a god, must be in want of a brain. I dared to believe otherwise, but in the end my divine beast still makes a fool out of me.

I think it’s time to cut my losses, but when danger finds its way back to my life, I have no choice. I need to trust those who have hurt me.

It is a truth universally acknowledged, that a human girl who dares to think she is loved truly by a god, must be in want of a brain. Or so I now believe, being the idiot who thought she was in a love triangle, when in reality the divine had only been making a fool out of me.

Everyone in the club has started jumping and dancing like we're at Times Square on New Year's Eve, and we're just ten seconds away from the big drop. They're also chanting my name while fist-pumping the air, and as my gaze drifts upwards, I accidentally find myself looking straight at a man with bright orange hair and whose shirt is unbuttoned all the way down to his waist.

'Stranger danger' flashes in my mind as Plutarch raises his own glass to my direction, but I force myself to bow my head in acknowledgement. My good girl days may be long gone, but even I know I'm only asking for trouble if I use my resting bitch face with one of Sub Rosa's Heads of State (or HoS as Cad calls it, which unfortunately sounds a lot like hoes).

A full minute goes by, but people around me are still dancing like crazy. I'm not sure why everyone's feeling celebratory, but maybe I'm simply overthinking things. Maybe folks here are just down for any excuse to party.

"Can I borrow that for a sec?"

Cad has already snatched the martini glass out of my hand before I even realize what he's asking for, and the crowd goes wild when he raises it up in the air like a trophy.

I know that for members of the Ancient Order of Sub Rosa, that glass of blood-red bubbles unquestionably confirms that I still have our god's favor. But what I don't get is why they're over the moon about it. Then again, I've spent years stubbornly refusing to have anything to do with the divine. So maybe I'm the only one here that's clueless?

Zodiac's question automatically has me nodding. "Yup." The bartender may be nice and all, but at the end of the day, this club is Sub Rosa territory, and everyone here is likely to side with Eros...even if they were to learn how our god has fucked me over.

Memories come to taunt me at the thought, and my teeth gnash against each other. I can't believe how much time and tears I've wasted feeling so guilty and torn between my god and Professor Lucious.

I should have known those two beings were one and the same person.

But I never did because I'm an idiot.

My mood swings back and forth between anger and hurt, and my head starts pounding as the DJ spins out a new track that's a cross between punk and several wailing babies. Everything I see and hear gradually becomes unbearable, and the urge to escape proves too overwhelming to ignore.

"Sure you're okay?" Zodiac presses.

"Forget about him," the bartender says gruffly. "You're his responsibility, not the other way around."

"I don't need babysitting," I protest.

Zodiac only shrugs. "You're our god's woman."

Not for long, I can't help thinking, but of course I know better than to say this, and I simply grunt out a goodbye to Zodiac.

Exiting the club is a battle, and I have to squeeze past a grinding crush of bodies before I can reach the tunneled stairway connecting the underground network of chambers to the surface. It's a semi-long climb, but I think it has more to do with heartache that I'm slightly out of breath when I finally reach the top.

Mossy-green walls magically part open to let mout, and if that doesn't spell 'secret society' I don't know what else does. A shiver skitters down my spine as I find myself back in one the vine-covered passageways of the labyrinth, and when I glance over my shoulder, the walls have already slid back into place. Just like that, it's as if the stone stairway I've climbed out of never existed.

An icy wind brushes past me at that moment, and I suck my breath in when the faint scent it carries is instantly recognizable.