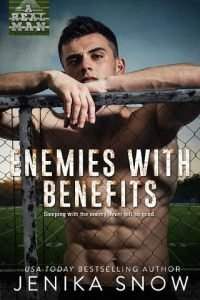 It was hate at first sight.

Malachi “Mal” Stevenson, my brother’s best friend, former captain of the football team, and the most popular guy at our high school—when he attended—was so ridiculously attractive I expected a song to play whenever he walked into a room.

He also knew how good he looked, which made him cocky, but only with me, it seemed. I couldn’t help but hate him... or love him.

It was the latter. Kind of. Mostly. I think.

I was pretty sure I was in love with him.

I’d known him for years. He’d been a part of our family all that time, always over, always looking so good it pissed me off even more, because he knew how hot he was.

He was cocky and stubborn, knew he got under my skin, so he pushed my buttons on purpose. I knew that was a fact by the smirk he always wore when he saw how pissed he made me.

And that’s why when I pulled into the driveway of my parents’ house after work, I couldn’t help but purse my lips when I saw his truck parked in my spot.

This was planned, something to further annoy me. It wasn’t like Mal didn’t know this was where I parked all the time. I swore he did this kind of shit on purpose, stuff to rile me up.

I parked along the curb, cut my engine, and curled my hands around the steering wheel. Mal was probably a pervert and got off on being annoying to me.

After grabbing my backpack and tossing my apron in the back seat, I curled my fingers around the paper bag that held the few bags of ground coffee my mother asked me to get for her after my shift ended at the coffee shop.

I made my way to the front door, cutting a glare toward his shiny black truck as if the inanimate object was Mal himself.

Once inside the house, I set my backpack on the floor by the door, toed off my shoes, and took the coffee into the kitchen. I assumed my father was in his study working late, and I didn’t see my mom’s car in the driveway, which meant she was probably out with her friends on a “wine date.”

I heard a couple deep, rumbly, masculine voices carrying through from the living room, and I cut my eyes in that direction, hearing Mal’s deep chuckle above it all.

I narrowed my eyes, because that sound did things to me. Wicked things, things that had parts of my body tingling and becoming warm, soft… wet. And that pissed me off even more.

I made my way out of the kitchen and into the living room, bracing my shoulder against the doorframe and crossing my arms over my chest, staring at my brother, Aidan, who sat on the couch beside Mal. The large flat-screen TV on the wall across from them showed some military video game they always played when Mal came over.

“Dude, did you see the new girl at school?" my brother asked.

Mal didn’t respond right away, and instead they both started cursing as something happened in the game that clearly pissed them off. Mal tossed the controller on the coffee table and leaned back, linking his hands behind his head. “Man, you know I don’t pay attention to that shit.”

My brother looked over at him, both of them still oblivious to the fact that I stood here eavesdropping. “You’re oblivious to what? Hot-ass girls?”

Mal made a deep noise that sounded like he was getting annoyed. “Things like talking about that shit with you.”

Aiden just sat there staring at Mal as if he’d grown another head. “So what, you’re not into pussy?”

I grimaced at Aiden’s crude language. I rarely heard my brother talk like this, but clearly he was free with his word choices with his friends.

“Dude,” Mal said in a disgusted tone and snapped his head in Aiden’s direction.

“What?” Aiden shrugged and leaned back on the couch. “I’ve just never seen you with anyone, and you don’t talk about liking any chicks. If you’re gay, I just want you to know it’s cool with me.” Aiden sounded sincere.

Now that I thought about it, I hadn’t seen Mal with anyone, and there weren’t rumors about him with girls at school.

I furrowed my brow, wondering if Mal wasn’t into the female population.

Mal was silent for long seconds. “I’m not gay, man. Not that there is anything wrong with that, but I am into the opposite sex.”

Aiden shrugged again. “Just saying, I’d be cool if you were.” They were silent for long seconds before Aiden spoke again. “But legit, you don’t talk about chicks. I never see you with any, so like, what’s the deal? Saving yourself until you’re married?”