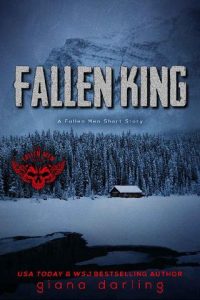 Dawn was only a thought at the silvered edge of the black night when I pressed a kiss to my wife’s soft cheek, dragged in a lungful’a her cherry scent, and left our bedroom.

I hadn’t slept for shit, and I was done lyin’ in bed with my tragic thoughts.

On this day any year ’fore, I’d be gettin’ up at this time to wake up my firstborn son. He woulda been twenty-two this year, so young in age and so fuckin’ wise. In truth, he’d been a grown man in the body of a boy since he was eight years old and the circumstances of our lives made him responsible for more than he shoulda been as a kid.

But fuck me, had that boy made me proud.

My chest ached and ached in a way it had since King was shot on the coastal cliffs and plunged to his death in Entrance Bay. It ached just as acutely, just as raw and infected with regret as it did that day, eight months ago, when I’d found out he was gone.

I knew I’d ache that way ’till the day I died and joined him wherever good men like him went. ’Cause I wasn’t the best’a men––I’d done some serious shit in my life––but I’d move heaven and fuckin’ earth to end up in the same restin’ place as my boy and my wife, who’d undoubtedly gain access to the best kinda Valhalla in the afterlife.

I was learnin’ to live with it as much as a man can live without a limb or a vital organ. I wasn’t whole, not anymore, but Lou was teachin’ me that was okay. Those days when I couldn’t move past the crushin’ pain and the only thing I could do was bury myself in my woman, slake myself in her beauty until the burn flared a little less.

Couldn’t let my babies outta my fuckin’ sight without feelin’ panicked and wrong.

If someone could get to King—so strong, so sure, a man more like a knight than a foot soldier in my army’a men in leather—it seemed anyone could get to my twin babies and take ’em from me.

So I guarded ’em fiercely.

They were with me more than they were even with Lou.

I took ’em to the garage, strapped to my chest, little meaty fists curled, full lips smiling as they interacted with all their uncles at Hephaestus Auto. I drove the truck so I could have ’em near me even though I hated cages and the Prez of a fuckin’ motorcycle club should be on his fuckin’ bike.

For the first time in near on forty years, I was livin’ life afraid.

Not free, like the motto of The Fallen declared, but chained in heavy fuckin’ irons by the terror that God or whatever power wasn’t done wreakin’ havoc on the life’a me and mine.

It burned in me that my woman, my little warrior who’d already been through so much, had lost King too. That my little girl, my thorny Harleigh Rose, was without her champion. That Monster and Angel would never get more than just stories ’bout the wise soul’a my eldest kid.

That Cressida, a woman I’d come to think’a as kin and the best kinda friend, was dead at heart ’cause her reason for livin’ was gone.

I’d lived in chains ’fore, literal shackles durin’ my years in prison. It’d been a concrete hell populated by livin’, breathin’ demons out to take my life and remind me daily’a my sins.

This was worse than that.

This was a wakin’ nightmare I’d never fuckin’ escape.

And in his wake, so much fuckin’ grief.

I stopped in at the twins’ room down the hall, pushin’ open the door with the intention’a checkin’ on the babies ’fore I checked on my other son, Ares.

Shoulda known there’d be no reason for two stops.

The kid, ten now and growin’ quick, was splayed out on the carpet beside the twins’ crib with Angel’s stuffed rabbit a makeshift pillow under his head’a thick, curly black hair.

Wasn’t a man takin’ to cryin’ like a fuckin’ pansy at the drop of a hat, but fuck me, if wet didn’t kick at the back’a my eyes as I took in that sight. Ares had appointed ’imself as sentry to the twins the moment they were born, and he’d snuck into the hospital room as soon as I went to inform the others we’d had two healthy babies. Lou told me she’d never seen such a solemn look on a boy’s face, which was sayin’ somethin’ ’cause Ares was a damn solemn boy.

He’d whispered to ’em then, cradled at Lou’s beautiful breast, as if she wouldn’t hear him.

“I got you,” he’d whispered, knowin’ those were the words I’d spoken to my girl Lou the first time we’d ever met amid a hailstorm of gunfire.