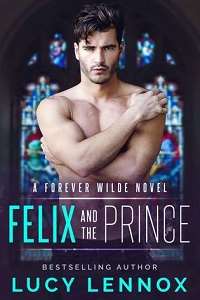 “Huh?” I asked, turning over and bumping into a familiar, hairy chest.

The groggy voice behind me spoke again. “It’s almost four in the morning. You need to get the hell out of here.”

“Shit.” I sat up and looked around, orienting myself. I was in my friend Iggy’s flat again. We’d been out clubbing the night before. As had become our habit too often lately, we’d ditched the women we’d been dancing with and gone back to his place for a quick fuck.

“Yeah,” he mumbled, turning over and presenting his bare ass to me. “I should have booted you out hours ago. If I find the paps on my stoop in the morning, I’ll kick your ass. Plus, I have a date tomorrow night with that guy I told you about, so I need my beauty sleep.”

I stood up and found my clothes in a rumpled pile by the bed. My phone and wallet were still in the pockets, and I quickly texted my driver to come pick me up by the side entrance to the building and made my way to the door.

As soon as I opened it, a pair of royally pissed-off eyes glared back at me.

“Sorry, mate,” I muttered to my bodyguard, Jon. “Let’s go. Hans is outside waiting.”

“Feel better now?” Jon smirked once we were safely behind the tinted glass of the sedan. “All nice and relaxed?”

“Fuck off.” I leaned back in the seat and closed my eyes. “You’re just jealous you didn’t get any tonight.”

“Who said I didn’t get any?” he joked, quirking his eyebrow and tilting his head toward my sixty-something-year-old driver.

I couldn’t help but bark out a laugh. “Right. Hey, Hans, when was the last time you got lucky?”

Jon snickered at me in the back seat while Hans continued. “Way better tits than you’ve ever had, Jonathan. And the woman could suck—”

“No!” I sputtered. “Please. You’ve been with me since I was twelve. Jesus, Hans. You’re like my grandpa.”

“Then maybe don’t ask, sir,” he replied with a sniff. “And may your beloved grandfather rest in peace.”

I thought about my grandfather. Hans referred to him often. Grandpa, King Lior VII, had been one of the greats. An all-around good man and benevolent leader. Smart as a whip and savvy in European diplomacy. I missed him like crazy.

“He’s probably not resting at all, and you know it. More than likely he’s chasing Grande around heaven,” I suggested.

“Your grandmother was a beautiful woman, Lior. I wouldn’t blame the king at all for not letting her get any peace up there,” Hans chuckled.

The car pulled through the service gates onto the palace grounds and parked in a hidden spot behind a short wall. Jon and I got out and made our way into the royal residential wing.

“Sorry about this,” I said again to my favorite guard. “I didn’t mean to fall asleep over there—truly.”

“One of these days your cock is going to fall off from skank rot.” He sniffed and looked down his nose at me as if he was the royal one.

“I’m safe,” I said. “And more often than not, I only fuck Iggy as you well know.” I was talking to myself more than anything. “I’ve known him since we were fourteen. I trust him with the royal scepter.”

Jon ignored the stupid joke and continued his lecture. “Maybe you should stop this hooking up bullshit and find someone. A nice man or woman you can build a life with.”

He shrugged. “Sir, the prime minister of Luxem—”

“Save it,” I interrupted. “I know all about Xavier and Gauthier. That’s not the same thing as hereditary royalty, and we both know it. If the next heir to the throne married a man instead of a woman, my grandfather would roll over in his grave along with every monarch before him for a thousand years.”

“So, what are you going to do? Continue to sneak to Ignatius’s flat when you’re a fifty-year-old king?”

I felt my head begin to pound near my temple. It was a subject I’d considered ad nauseam for years. “No. I plan on finding a good woman to settle down with. Someone worthy of being the queen when the time comes. But right now, I’m going to sleep and hopefully not think about it for a few long years since my father is healthier than most men half his age. Good night.”

“See you in the morning, sir,” he said, holding open the door to the wing holding my private quarters.

Once in my apartment in the palace, I saw my valet sitting at the kitchen table in his button-up pajamas and bathrobe.

“Sir,” he sighed. “Don’t even tell me. I can smell the club smoke from here.”