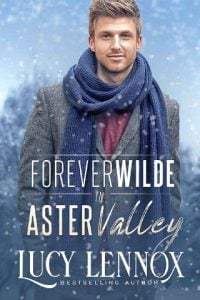 “Take him down, mother… fudger!” Ginger Marian screamed at the giant television screen, loud enough for the Riggers players to hear her in Los Angeles.

I was starting to believe this special football-viewing room had been the key selling point to the Marians’ rental of Rockley Lodge in Aster Valley for the family reunion in the first place. Not only was it large and filled with comfortable leather recliners, but it was also decorated with priceless NFL memorabilia owned by Tiller Raine, the celebrity quarterback who apparently owned the lodge itself. And the acoustics were…

“Yeah!” Ginger’s shout echoed around the room, and she jumped to her feet to perform a kind of rhythmless bump-and-grind that made the baby girl in her arms—a baby I was almost positive didn’t belong to her and my cousin Pete—shriek with contagious laughter. “Tackle him! Eat dirt, Nelson Evangelista! Isn’t that right, Reenie?” she cooed at the baby, who laughed even harder.

“So I told him no,” Nico Wilde continued as Ginger and the baby kept dancing. “I refuse to ink any version of a spider, even if it is a cartoon one. That’s too creepy. Find someone else.”

Ben was my cousin Griffin’s biological brother, and I was pretty sure he was married to the tall guy named Reese, who was outside with some of the Wilde cousins. I knew for sure that Ben had a memorial tattoo of his daughter’s tarantula right at the spot he was rubbing, though, because he and the other guys had been showing off their ink the day before, and that experience had been seriously memorable.

It turned out I had a thing for guys with tatts. Who knew?

“Pfft,” Nico replied. “Your tattoo is the only exception and only because you’re my best friend’s baby bro. And… okay, maybe if Georgie wants her own one day, I’ll do it. But only because no one else is touching her virgin skin.”

The Marian and Wilde men sitting around him collectively shuddered at the idea of anyone even thinking about inking one of their precious, perfect babies.

It was kind of adorable.

Nico’s daughter climbed off his lap and walked over to Ginger to pat her knee with a chubby toddler hand. “Jesus can’t help,” she said, knowingly. “He’s a bad man.”

West choked on his beer and sputtered. “Pippa, baby, who told you that? That’s not true.”

Ginger lifted an eyebrow of accusation at West and Nico. “I thought Texans loved their Jesus.”

“They do,” Nico assured her. “I mean, we aren’t churchgoers ourselves, but we aren’t haters either. I don’t know where she got—”

Pippa nodded and shot a sympathetic glance at Ginger. “See, Auntie Ginge? Told you. Jesus is a bad man.”

Ginger bit her tongue to keep from laughing while West buried his face in his hands and Nico sighed.

“As I was saying,” Rebecca Marian said sweetly, pulling me back to her earlier conversation while ignoring the antics of her daughter-in-law and her… Huh. What relation were Nico and West to Rebecca, exactly? My brain throbbed just trying to piece together the complex relationships there. “You have to use the hand mixer because stirring it with the whisk doesn’t break up the clumps of sugar well enough. It will make the chocolate sauce lumpy.”

I nodded even though there was no way I’d retain any of this information.

My senses were completely overloaded, and I felt a horrible headache coming on, and that was before I even started processing all the emotional baggage of finding out that I was part of a huge family I hadn’t known existed. While I could tell the Marian and Wilde families were made up of very good people, and I knew just how lucky I’d been to learn I was related to them through that DNA registry last year, being in the midst of so many new faces and personalities was exhausting and overwhelming.

I was an only child of an only child sitting in a room overflowing with new-to-me cousins. There were at least twenty of them, and that didn’t even include their spouses or kids, my biological grandparents, grand… uncles, and all the various friends they’d brought with them on this holiday vacation to Colorado.

Not for the first time in the seven months since she died, I wished my mom was with me. It had been just the two of us for so long, but she would have thrived in a situation like this, and it felt strange enjoying it without her. Now, despite the crowd of loving family around me, I felt a little… lonely.

The idea behind the trip was very kind. The Wildes and Marians had wanted to meet up somewhere to get to know each other better and welcome me into the fold. Now that my mom was gone, this crazy crew was all I had left, and I barely knew them.