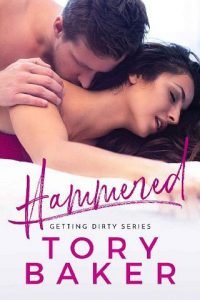 “I told you it needed to be done today, Peyton.” That’s how I’m greeted after coming back from my lunch break. It causes me to pause. I mean, my desk is a footstep away. I cock my head to the side, taking in every nuance that is Chance Adams, my boss. He’s ruggedly handsome with his messy dark hair, moss-green eyes, and a nose that’s slightly crooked from an on-the-job accident that happened a couple of months ago. Add his days’ worth of beard growth on his jawline that travels to his neck, and even when he’s being a dick, which seems to be most days lately, he’s still melt-your-panties hot. I would know firsthand too, because this happens to me daily. Today, Chance is working in the field, something he does four out of the five days I’m here. It makes for a peaceful day, mostly. Unless he’s on a tangent like he has been lately. The gray shirt he’s wearing with his company logo, Adam’s Construction, molds to his tall frame, his well-worn jeans clinging to his muscular legs. He’s the whole package, except today it’s not helping. Nothing is. When I went on my lunch break, he was yelling the office down. And not just at me either. The guys were getting a ration of shit, as was the lady I was talking to on the phone on the other side of town, apparently, when Chance took the phone out of my hand as I was relaying a message and yelled that she better get her boss on the phone. I rolled my eyes, stood up, slammed my laptop down, and walked out of the office to him saying, “I’ll fire you, Peyton!”

I rolled my eyes. Chance is full of shit. No one could deal with him the way I have and still continue to. It’s not that he’s a complete and utter dick; it’s just that he takes it out on the person closest to him. Which, unfortunately, tends to be me.

“It’s on your desk. You would have known that before throwing a temper tantrum earlier.” He didn’t hear me mumble, “Jerk” at the end of that, or at least I don’t think he did. Chance has been on a rampage all morning and someone must have peed in his cheerios. So, I did what every person would do. I left for my break, a cup of hot tea and a sandwich helped me breathe through the fact that I was ready to quit when he said he’d fire me. I’m not a quitter though, so I’ll deal with it until I can’t bear to anymore.

“Not sure why I put up with your sassy-ass mouth, Peyton Jennings,” he grumbles, stomping his feet to my desk. He’s worse than my overbearing brother, Bridger, with the way he is acting today.

“Because no one else can deal with you. Didn’t the temp agency tell you that before you finally saw the light and hired me?” My hip is propped on the edge of my desk. This morning I felt great when I woke up and had a smile on my face. I took my time with my hair, not that I had to do much in that regard. I lucked out in that department and barely have to do anything to it, since it dries in soft waves and only requires some serum to tame the small amount of frizz. My makeup was soft, some blush, mascara, and lip gloss, not really liking the feel of a lot of products on my face. Keeps it simple. My outfit was what took me forever to decide on. I tried on a pant suit, nixed that completely, then a pencil skirt, and I definitely wasn’t feeling that. I found a shift style dress that fits loosely around my body, light and dark purple flowers over a white background. The three-quarter-length sleeves gave me the coverage I’d need to keep warm in the office, the hem stopping at just above my knees, keeping it business casual, tying it all together with my cork-screw wedges.

“That mouth of yours, it’s going to get you in trouble one day.” Chance’s eyes eat me up, as if he’s just now seeing me for the first time. Today is different though. He’s making his way towards me, his long legs eating up the distance between us until my ass is planted on the desk.

“Are you sure about that?” I taunt him.

“One hundred fucking percent.” Chance’s eyes aren’t on mine. Instead, they’re on my legs. His hands reach out tentatively, the tips of his fingers lightly caressing my thighs.

“God,” I moan out when I feel them dip under the hem of my dress. I’ve dreamed about this more times than I care to admit. A deep-seated yearning for my boss, just like this, so entrenched within me. The world falls around us, and still the only thing that captivates his attention is me.