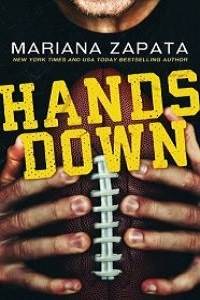 “The word is out! The Oklahoma Thunderbirds have signed quarterback Damarcus Williams to a two-year deal worth $25 million. This move comes weeks after the organization announced that Zac Travis would enter free agency following five seasons in Oklahoma City. Michael B, is it over for Travis as a starting quarterback in the NFO?”

The good-looking man in a dark gray suit on the television visibly bristled before leaning forward into the camera. “Have you seen him play these past two seasons? I don’t know why the Thunderbirds waited so long to take him off the roster! I mean, are you kidding me? This deep in his career, he’s only managed to lead a team into the playoffs twice! What—”

“Blanca, what are you doing?”

Instantly tearing my gaze away from the closed captioning flashing across the bottom of the television screen I’d had my eye on from about fifteen feet away, I only just barely managed to think about what I’d been in the process of doing before the image of a familiar-looking man in a gray, white, and orange football uniform had caught my attention.

“Changing the channel,” I answered the man on the other side of the counter from where I was standing. I lifted the remote in my palm as proof.

Did he just call me Blanca again?

I knew without a doubt that my new boss was trying to bust me not working. He was always creeping around, popping up out of nowhere when you least expected him. Fortunately, I had probably only been watching the television for about a minute. Just long enough to recognize the man the commentators on The Sports Network were talking about and catch the beginning of their discussion.

My boss—one of my three new bosses, if I was going to be technical—stared at me blankly from where he stood across the counter, either thinking I was full of shit or trying to figure out how to turn what I’d been doing around on me so he could have an excuse to bitch.

Because that was what he did—really well, unfortunately.

So well that most of my coworkers had quit over the last month since the gym had been officially taken over by its newest owners. Asshole 1, Asshole 2, and The Decent Guy Who Was Unfortunately Never Around Who Might Also Be An Asshole If He Ever Spent More Than Five Minutes At Maio House. That was how we referred to them—at least those of us who were left.

Okay, maybe it was just me and Deepa who did, but I highly doubted it.

“One of the members asked me if I could change it,” I kept going, lying out of my freaking ass at that point, but it wasn’t like he knew that. I wasn’t going to feel bad about it either, especially not when he was still butchering my name this long into knowing each other. I’d corrected him at least ten times and spelled it out for him twice, maybe more. B-i-a-n-c-a M-a-r-i-a B-r-a-n-n-e-n. Bianca because my sister had named me, Maria for my mom’s abuela—her grandma—and Brannen because… it was my dad’s last name.

“And it’s Bianca. With an I. Not an L,” I corrected the man who was now in charge of signing my paychecks, tapping in vain at the name tag on the left side of my chest with a smile that was 200 percent forced. On that note, I needed to get him out of here and back into his office before he really did find something to complain about.

Then again, as I’d learned, he could find something wrong with… well, everything. “Did you need something?”

Besides a life and a personality change. Maybe multiple enemas too, to get whatever was lodged up his ass out of there.

My boss stared at me for a second longer as he leaned against the counter I had been hired almost three years ago to work behind. The front desk for a gym was a place I had enjoyed working at up until exactly a month ago.

I didn’t need to look at the front of the counter to know that the words MAIO HOUSE were painted across the front of it. The world-famous gym hadn’t changed names when it had been officially sold a few weeks ago. The three investors—one of whom was Gunner, the man who couldn’t remember my name to save his life—had bought the brand and the legacy behind a gym. Maio House had been in the DeMaio family for seventy-something years and had bred dozens of world-class athletes, starting with boxers when it opened, and now mixed martial arts athletes.

The atmosphere had been great before. The members were mostly all nice, and I had liked my coworkers. The DeMaios had been the best owners and managers, as well.

Then one day, out of the blue, Mr. DeMaio told us he was selling.