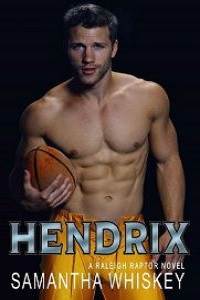 I tugged on my mask, making sure it covered my face from the bridge of my nose, over my forehead and eyes, and remained secured behind my head. The footwear was surprisingly comfortable for a pair of pirate boots. At least, that’s what the lady at the costume shop had called them.

The gala was in full swing by the time I arrived, sneaking in the back door like I wasn’t on the VIP list. It wasn’t that I hated the red carpet, I was just…over it.

It was unlike any charity event I’d ever been to, and spectacular wasn’t a good enough word. It was original. I liked original. Raleigh’s newest museum for modern art was lit like a nightclub, lights swirling over the exhibits in the main gallery while barely skimming the dark, smaller rooms I would have found perfect for darker deeds a year ago. But this wasn’t a year ago.

“Hendrix!” Roman, the running back for our NFL team, the Raleigh Raptors, waved me down from the table he stood at with his fiancée, Teagan. Now there were two people so well-matched they even made me a believer in the whole love thing.

“The Flintstones?” I grinned, hugging Teagan first just to piss off Roman. He was one of my closest friends, which entitled me to the amount of shit I liked to give him. He’d fallen hard for his best friend, not that I could blame him. If my best friend had been anything like Teagan, I’d have fallen, too.

“The Dread Pirate Roberts?” Teagan challenged, tilting her head slightly with a bone in her hair.

“As you wish,” I said, stepping back with a bow.

She laughed, and Roman rolled his eyes, pulling me into a hug before securing his arm around Teagan’s waist.

“Did anyone tell the Children’s Hospital that it’s not Halloween?” I asked over the driving beat of the music.

“Kids always like to dress up,” Roman answered with a shrug.

“Right, because there are so many kids here.” I spotted two girls in sixties go-go dancer outfits grinding on each other across the mirror ball-lit floor. It was a strictly over twenty-one crowd.

“Thank God, no!” Teagan swatted my arm. “Besides, it’s a masquerade ball…uh…club.”

I laughed. “I’m just happy you guys are here.” I took a glass of champagne from a passing waiter and tipped him. Wait staff didn’t make nearly enough money, and I made way too much to not help out.

“I happen to know at least a dozen women who only bought tickets because they knew you’d be here,” Teagan said, her gaze sweeping the floor.

“Not interested.” I sipped my champagne but grinned at the sight of our coach in a Phantom of the Opera cape, spinning with zero rhythm on the dance floor. Okay, that was worth the large donation in itself. No doubt his daughter Savannah would come along any minute just to torment me in any way possible—the stunning, strong, sexy, and totally off-limits redhead had a way of driving me up the wall, but for right now, I was content to watch her dad and laugh.

“Yeah, okay,” Teagan teased and waved to a friend near the bar. “Be right back!”

Roman’s eyes were glued to her ass as she walked away.

“Damn straight,” he agreed. “And what’s that bullshit that you’re not interested?”

I shrugged and took another sip.

He lifted both his eyebrows and stared me down, which was a feat considering he was easily four inches shorter than I was.

“It’s been a while,” I admitted with a shrug.

I scanned the floor.

I drained the rest of my glass.

I shook my head.

“Holy shit, what’s going on with you?” he asked. “I’ve never known you to go for more than a week, and that was during playoffs, Hollywood.”

Ah, yes, Hollywood. I had more than a few modeling contracts to back up that nickname, and it had never really bothered me. I couldn’t help the way my face looked, or that I stayed in shape to keep my job as a star wide receiver. But damn, I was getting sick of only being seen for those two things—sick of only seeing the same in others.

“I have my reasons,” I said, twirling the stem of my glass between thumb and forefinger.

“Are you seriously going to make me dig them out of you like we’re two teenage girls at a slumber party? Because now you have me just curious enough to freeze your bra.” The corners of Roman’s lips tugged upward.

“Fine.” I spotted Teagan making her way back to us and hurried through the rest. “About six months ago, I took this brunette back to her place, and when I got her shirt off, I noticed this birthmark on her ribcage.”

“A birthmark scared you off of sex?” He snorted.

“No. The fact that I’d seen the birthmark before did. I’d already hooked up with her and didn’t remember when I picked her up. How the fuck does that happen?” I shook my head, the tails of my mask whipping back and forth.