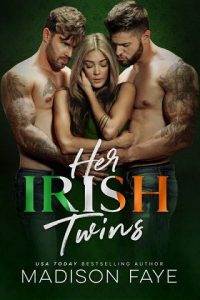 She undoes the top button of her blouse, and my pulse starts to quicken. The next one follows suit, and my jaw tightens. I watch as her delicate fingers trace lower, popping button after button until she peels the shirt off her smooth shoulders and arms, and lets it drop to the floor, revealing her lacy white bra. Fuck me, and the damn thing is so thin and sheer that I can see her fucking nipples through the lace.

Shit, this is going to be a problem.

Next to me, Ben growls, and I glance at my brother to see the same tight look of raw heat and lust etched on his own face before I look back to her. On the screen, she stretches, raising her hands above her pretty blonde head and arching her back, which only makes those full breasts of hers strain against the bra. She rolls her neck before she puts her hands behind her, and the bra drops away.

Fuck, those nipples are goddamn perfection—soft, pink, puffy, and fucking begging for my mouth around one of them. And hell, Ben’s around the other. Charlotte stretches again before she walks out of view, and through the speakers, we can hear the sound of the shower running. She steps back into the room, and her hands move to her jeans. She pops the button and tugs down her zipper, and this time both of us groan at the same time as she peels the skin-tight denim down her long, creamy legs.

She kicks and steps out of them, and then without any hesitation, she slips her thumbs into her lacy white panties and slips them down as well.

I suck in a breath of air at the sight of her smooth little pussy nestled between her thighs. Ben groans deeply, and when I glance at him again, I can see his body tightening and muscles clenching just like mine.

Yeah, this is a big, big problem.

On the surface, this should be easy: keep an eye on the target, monitor movements, make note of any outside contacts, and then react accordingly. Obviously, the job is slightly more complex than that—more nuanced, I guess—or else any old goons from this side of the pond could have done it. But instead, the Kings shipped Ben and I over for it.

Like I said, this job is nuanced, which is why it’s us two over here direct from the Irish Kings in Dublin to monitor the situation. And the situation is this: three weeks ago, one of our men over here, Ash Delancey, disappeared. Ash is a Dublin lad too and was over here overseeing a transition of power in some of the crime circles who operate under our banner here in Boston. Normally, the Kings and the council back in Ireland stay the fuck out of the way things are run over here. But sometimes, things need correcting.

A year ago, two other mates of ours came over to do the same thing. Eamon and Clay were here on council orders to take out an underboss who’d way, way overstepped his bounds. The fucker had started running girls, which we as an organization do not do, and young ones at that. Too young. It needed dealing with, which is where Clay and Eamon stepped in.

As it happens, they also stepped into a world of shit getting mixed up with a girl they met during the whole thing—one who ended up being a fuckin’ CIA agent, at that. But somehow in all of that, they hung on to Phoebe—both of them. In fact, here we are a year later, and she’s back in Dublin with them.

Life is some crazy shit sometimes, isn’t it?

On the screen, our mark pads naked and gorgeous back into the bathroom. I don’t even have to say a thing before Ben growls and reaches for the remote. He flicks to another camera angle, this one right in the shower, and we both groan deeply as we watch her step in under the soft spray of water. Soapy hands slide over her body, cupping her full breasts before sliding down between her legs. I hiss, and my already rock-hard cock pulses and throbs in my jeans as she runs a hand over that pretty little cunt.

I glance at him again, and grin when I see his hand rubbing his thick cock through the pair of boxers he’s wearing. Yeah, we’re cut from the same cloth, Ben and me. At times, we’ve been mistaken for twins, but in truth, Ben’s older by ten months.

…What can I say, our parents knew how to get busy. You can insert your own Irish Catholic joke here.

So, we’re not twins, just “Irish twins” that happen to look pretty damn identical. Identical enough that we used to have fun messing with our teachers at school, and later, even more fun showing up to dates with each other’s girlfriends and seeing how long it took them at the door to realize they were getting had. Of course, later, we found out there were girls out there who were only too happy to have the mostly identical brother show up, and happier still to keep him there once they figured it out.