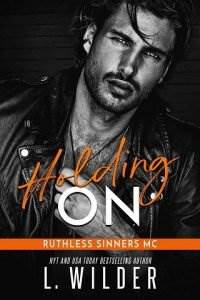 “There a problem here?”

“No, there ain’t no fucking problem.”

I’d been sitting at the bar having a drink with Rafe when a beautiful brunette caught my eye. She was standing next to the front door with a wide-eyed expression, making it pretty clear that she’d never been in a strip club before. Even in the dark, I could see that she was hot, smokin’ hot, but she looked completely out of place dressed in a trendy long sweater and jeans with knee-high boots. She hadn’t been standing there long when some asshole came up to her and started trying to make a play. I’d seen her shake her head, telling the guy no at least a dozen times, but he just kept at it. Concerned that he might do something stupid, I walked over and tried to intervene. Looking down at the petite brunette, I asked her, “Everything all right over here?”

“Yeah, I’m okay,” she replied, while toying nervously with the odd-shaped silver pendant on her necklace. “I was...um...I was just trying to tell this gentleman here that I’m not staying long, so I don’t need a drink...but he keeps insisting.”

“Understood.” I looked back over to the dickhead who wasn’t taking no for an answer and said, “Time for you to move on.”

“This is some bullshit, man.”

“Fuck this,” the guy grumbled as he turned to leave. “I don’t need this shit.”

Once he was gone, I looked over to her. She continued to rub the pad of her thumb against the back of the silver pendant. “You okay?”

“I am now.” A soft smile crossed her angelic face. “Thanks to you.”

“No.” She released the pendant, letting it drop to the delicate line of her cleavage, then motioned her hand to the crowd behind us. “I’m here with my friend, Madeline. She’s looking for her boyfriend ... or soon to be ex-boyfriend.”

“He in that much trouble for being here?”

“Oh, it’s not just this,” she scoffed. “The cards have been stacking up against him for a while now, so I’m hoping she’ll give him the boot.”

“And you came along to watch the show?”

“Well, yeah.” She tucked a strand of her hair behind her ear. “I couldn’t let Madeline come here alone.”

“I see.” I glanced over my shoulder at Diamond as she danced on the stage. “So, what do you think of the place?”

Unable to help myself, I let my eyes skirt over her soft curves, and damn, she was fucking sexy. It was easy to see why the asshole didn’t want to take no for an answer. Hell, I was struggling myself, loving nothing more than to take her home and fuck the life out of her, but that wasn’t going to happen. This girl was the real deal, all class, the kind a man committed his life to and did everything in his power to make happy. As tempting as she might’ve been, I didn’t fuck with women like her. She gave me a light shrug and answered, “It’s great ... if you’re into this sort of thing.”

“And I take it you’re not into this sort of thing?”

“Don’t get me wrong.” Her eyebrow inched higher, and she snickered. “There’s definitely something intriguing about all this.”

Her mannerisms were subtle, almost undefinable, but there was no doubt that she was flirting with me. I could see it in her eyes, in the way she moved, and the slight tremble of her voice, leaving me wondering why a chick like her would be into a man like me. I gave her a slight smile and replied, “That there is.”

I could’ve stood there and talked to her all fucking night, but unfortunately, fate had other plans. She was just about to say something when I heard Rafe call out to me. “Yo, Shotgun!”

I turned to see what he wanted and found him pulling a customer towards the back door. I could hear the anger in Rafe’s voice as he shouted, “I need a fucking hand!”

“On my way!” I looked back over to the brunette. “I gotta get going. You and your friend try to stay out of trouble.”

Her dark eyes locked on mine, sending the blood rushing to my cock. “I’ll do my best to keep her in line.”

Fuck. It was a damn good thing that Rafe needed me; otherwise, I might’ve ended up doing something I’d regret. I gave her a nod, then turned and started through the crowd. As soon as I exited the back door, Rafe had some thug pinned against the outside wall. He took a moment to clue me in on what had gone down, then stepped out of the way so I could take over. The guy tried to bolt, but I quickly grabbed him by the throat and slammed him back against the wall. His beady eyes narrowed as he spat, “You don’t know who you’re fucking with, man.”