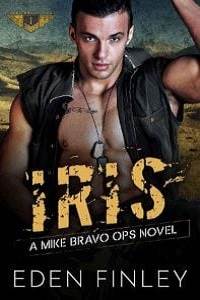 Found family, drinks, and some R and R. It’s the perfect way to come down from a job. We’ve already had a few days to ourselves, and when our boss, Trav, suggested poker night, we all came running like good little puppies.

I grab another beer from the fridge in the rec room of Mike Bravo headquarters, and on my way back to the poker table, I kiss Angel on the top of her head.

“Stop trying to see my cards, asshole.” She’s feisty, and we all love her for it.

“I was just showing you affection.” I pout.

Well, duh, she’s one hundred and fifty pounds of lesbian. Plus, even if she weren’t, she’s too scary to date. She’s an expert shooter and the best sniper on Trav’s payroll. She could take you out from a thousand yards easy.

I smile widely at her and wink.

We’re a family here, and I don’t know where I’d be if Trav hadn’t recruited me from the army. I’d probably be working minimum wage and getting antsy about not having access to explosives. Instead, I’m doing what I was born for under a command I trust. I don’t fear my teammates turning on me because of how I identify or who I like to sleep with. I’m what I like to call an equal opportunist, and certain uptight military folk never understood that.

Trav does. As a gay man who served during Don’t Ask Don’t Tell, he wanted to create a safe work environment for anyone who needed it. I have to say, the private sector is a fuckton more fun. Fewer rules, more money.

The only sucky part is finding someone who can understand why I’m gone so much. This job isn’t just my job. It’s my life. And that means I can be away for weeks or months at a time, doing something I can’t tell my partner about.

And I understand it, I do. It would be hard to say to friends and family, “Oh, no, sorry, Iris couldn’t make it. He’s on a mission. But he won’t tell me where. I don’t even know what country he’s in.”

I would have no idea how to do anything else. We’ve only been back for a few days, and I’m itching to get back in the field. How people with regular jobs don’t question their sanity is a mystery to me. Doing the same thing over and over again?

Zeus snaps his fingers in front of my face. “Your call, fuckface.”

Ah, yes. Found family is the best. And they all love me. Clearly.

“I fold.” I throw my cards on the table and lean back in my chair. “Hey, question?”

Angel looks up at the roof. “Dear God, I promise I’ll stop having sex with women if you don’t let Iris ask whatever is about to come out of his mouth. Amen.”

“All I was going to ask was who wants to hit a bar up after this.” I want to go out. I want to do something. I want to get the adrenaline pumping.

Angel snorts. “Says the guy who’s almost out of chips.”

“Exactly, but apart from being out of money, I need to get laid, and none of you are doing it for me.” That’s a lie. The truth is, I’d probably fuck each and every one of the Mike Bravo team if it was allowed. Which it’s not.

Angel breaks out into a pitchy rendition of P!nk’s “U and Ur Hand,” and the other guys snicker.

“Is anyone willing to go out?” I ask the room full of ex-military hardasses. “You know I can’t be left to my own devices.”

But don’t even get me started on how I got the name Iris. I require intense supervision. It was during my first week of basic training when my COs started calling me that, and I endured it throughout my whole military career. I thought with switching to the private sector, I might’ve gotten a new name, but apparently my reputation preceded itself, so I’m stuck with it. That doesn’t stop me from milking it when it suits me.

Domino calls out from across the room. “I’ll go with you.”

“Ugh. Anyone who’s not straight want to go?”

Domino flips me off, but I know he doesn’t actually mind. He’s the only straight guy on the team, but Trav hired him because they served together. Trav trusts him with his life and made him his second-in-command, so that’s good enough for us.

I would jump at the chance to go out with Domino to some bar and find a woman to take home, but with the mood I’m in, I need the adrenaline hit of being with a man.

Don’t ask me why it’s more thrilling hooking up with a dude, but it might have something to do with the roughness of it, and I don’t mean getting rough with them. I like it when they get rough with me.