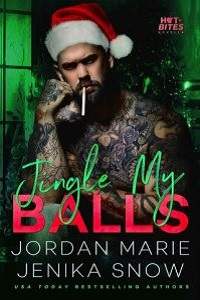 I f I hear one more Christmas carol, I’m going to hurl. That’s it. I hate this time of year. It’s cold, it’s miserable, and people are just plain rude. I tried Christmas shopping today—I really did. Fifteen minutes in the store with holiday music playing in the background, people pushing and shoving, getting mowed down by shopping carts, and I was done .

Which is why I’m limping on the sidewalk, with not one shopping bag to show for my trouble. Some woman inside the department store ran into me with her cart. She didn’t apologize; she just huffed, like I was the one who caused the accident .

I find a bench close to the park and sit down to inspect the damage. I bend down to look at the back of my leg and wince at what I see. My stocking is torn and there are these gigantic runs in the nylon going up my leg. The heel of my foot is bloody and has been ripped open at the exact spot the back of my Jimmy Choos slide against. My favorite pair of heels didn’t exactly escape hell either. They’re scuffed and have serious damage. If I had it to do over I wouldn’t have walked away. I would have given that lady a dirty look and thrown my shoe at her before giving her the finger .

“Looks like you’ve been trampled by Santa’s reindeers,” a deep voice says to my right. I turn and look at him and everything in me stills. Chills run down my back and the voice seems to vibrate in the very center of me, sending instant awareness through me and making my body hum with need. Which is unusual for two reasons. One, I’ve been on a break from relationships and men in general for the last five years. My last breakup was not good—so not good that the thought of trusting another male scares the hell out of me. The last and most obvious reason is the one that takes precedence, however. I don’t know this man. I don’t know him at all and worse… He’s wearing a Santa outfit .

“Do I know you?” I sound like a cranky old bitch right now, but I’m not in the mood for some guy dressed up to try and get me in the holiday spirit, not matter how good looking he is .

I rest my back against the bench and look at the stranger, feeling my eyebrows lift up in sarcastic disbelief. Yeah, he’s wearing a Santa suit, a cheesy red one that looks like it’s made out of crushed velvet and that’s trimmed in white fake fur. I suppose that’s not strange; ‘tis the season and all that. What doesn’t fit the part, however, is when he yanks off the beard and hat and pulls off the white gloves, I can see that his large, masculine hands are covered in ink .

I draw my attention back to his face. Now that the fake beard is gone I see he’s sporting a black beard with a bit of gray sprinkled in. Dark, almost obsidian eyes stare down at me. They look intense, mocking and yet at the same time somehow bored with life. He pulls out a cigarette and then lights it, cupping his hand against the cool New York wind .

“I don’t think Santa is supposed to smoke,” I tell him .

“Sweetheart, Santa does a lot he’s not supposed to do,” he smirks and something about that look on his face makes my body heat .

“Whatever. You should make sure your boss doesn’t see you do that,” I mutter, annoyed because he’s making my traitorous body react when it shouldn’t .

“God, can you drop the act? I’ve about had it with Christmas and the last thing I want to do is hear you tell me how you spend your days on the North Pole playing with your reindeer,” I huff .

“I make the elves stroke my reindeer horns actually,” he smirks. “What’s got your panties in a twist ?”

“You mean besides being mowed over by a woman with a cart and ruining a pair of pantyhose and my favorite pair of heels ?”

“Who was she? I’ll put her on the naughty list,” he asks and at this point I just shake my head .

Who is this guy ?

“Will you give it a… What are you doing? ” I feel my eyes grow big as I watch him get down on his haunches in front of me .

“I thought that was rather obvious. I’m checking your injury out,” he murmurs, ignoring my protest and pulling my leg up into his lap—despite me trying to pull it away .