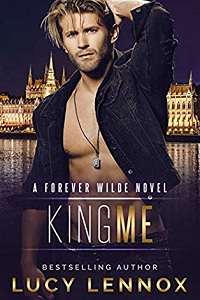 Never pick a fight with your boyfriend when you’re in the middle of stealing a Van Gogh. Because he might just decide you’re not worth a hundred million dollars and it’d be better for him to ditch your ass at the scene of the crime.

“Elek, what the fuck?” I hissed, finding it difficult to hide my exasperation. “We’re in the middle of a job. Now’s not the time to start talking about what comes next.”

I bent back over the hundred-million-dollar painting lying on the floor in front of me, carefully running my gloved hand along the ragged edges of the canvas to smooth it before gently starting to tuck it into a roll. It felt almost sacrilegious rolling a painting as valuable as this into a tube, but it was the only way to practically transfer it.

“You won’t even consider it,” Elek continued, as if I hadn’t spoken. “It’s an easy job. Security is minimal. We’d barely break a sweat.” He paced through the room as he talked, the beam of his flashlight sweeping in arcs across the floor.

My shoulders tightened, a rebuke on the tip of my tongue, but instead I closed my eyes and blew out a breath, trying to keep calm and focused. I hated distractions while I worked. Which Elek knew, but it never seemed to stop him.

I tried to tell him distractions made people sloppy. They got you caught. I should know—as an art history student, I’d taken an interest in art theft and forgeries which included quite a few stories of art thieves getting caught. I’d thought that perhaps it might lead me toward the FBI or working for an auction house or insurance company sniffing out fakes.

But then I’d met a charming older man and ended up on the other side of the equation.

“This should be obvious, yes,” he said.

He wasn’t going to let it drop, which meant the only way to end the conversation was to respond, “I just don’t see the point.”

He stopped his pacing and turned toward me. “It’s on the list,” he said evenly. “That’s the point.”

I resisted the urge to roll my eyes. Elek and his damned list. Over the years he’d compiled a wish list of items he wanted for his own personal collection. In the past he’d only stolen items on the list if the opportunity arose—like if he was on a job at the same location as one of the items on the list, he might make a detour to nick it. But recently he’d been planning jobs around the list itself, which seemed like a lot of risk to take just to steal something we couldn’t turn a profit on.

I shrugged. “It’s not a job I’m interested in.”

“Since when does your interest in a job matter?”

I rocked back on my heels and looked up at him. “Since I started thinking for myself.” I knew as soon as I said it that I shouldn’t have. His eyes narrowed and his nostrils flared as he drew in a sharp breath.

I held up a hand, hoping to placate him. “Look, let’s just get this finished, and then we can discuss it when we get home.”

Elek met my eyes for a long moment. Then he nodded. “Sure thing, macska.”

I turned back to the painting, starting to gently slide it into the tube. The next thing I knew, the light from Elek’s flashlight swung in a sharp arc, and then there was a loud crack followed by a bright explosion of pain radiating across the base of my skull.

My first thought was confusion.

My second was shock.

My third was that head wounds tended to bleed and I didn’t want to get blood on the canvas. I fell back away from the painting, landing on my hip. My entire head rang with pain, and I squeezed my eyes shut, fighting against it.

I felt his hand, warm and reassuring, take mine. “Sorry, macska,” he said softly.

I was about to ask sorry for what when I felt something sharp and plastic tighten around my wrists.

My eyes flew open. “What the fuck?”

I was so disoriented by the pain that it took me a moment too long to understand what was going on. By then Elek had bound my hands and was dragging me toward the wall.

Instinct took over and I struggled against him, but that earned me a knee to the stomach. While I was doubled over, trying to catch my breath, he finished zip-tying me to the radiator.

“What are you doing?” I gasped.

“This is the end of the road for us, kitten.” He didn’t even bother looking at me when he spoke. Instead he knelt over the painting, and I winced as he shoved it into the protective tube as if it were a boy band poster being sold on Black Friday at the mall.