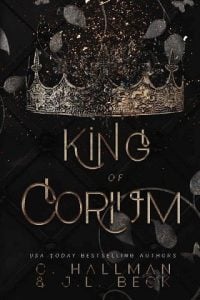 It’s funny how one day all can be normal in your life, and then the next, the rug is ripped away, and you’re left fumbling, trying to regain your footing. A year ago, I was a different person. Happy, normal, and content with my life. I couldn’t think of one thing I would’ve changed about my life, but now, if I could, I’d change it all.

It wasn’t like my father had sheltered me from our namesake or the violent and dangerous things we did. The blood running in my veins was mafia blood; my father had bled for our name, and I know I will do the same someday.

Growing up, I didn’t think there would ever be a time when that would change or that I would want to escape the life I was born into and hide from the rest of the world, but that day came one year ago, and since then, everything’s been headed in a downward spiral.

The happiness inside me shattered and evaporated into thin air, making me the vile pit of anger and hate. I didn’t need this pathetic university, but it was this or sitting in that giant house, a reminder of everything I wanted to leave behind looming over my head. At least now, I might be able to escape my mother’s constant worrying and my father’s watchful eyes.

“Ready?” I ask, glancing over at Ren.

He shrugs, his hands still tucked perfectly into the pockets of his black jeans. Even with all the money his family has, he still chooses to wear the least expensive clothing. Ren is modest at best, never showing or bragging about what he has. It seems like he cares about nothing, but the truth is, he simply doesn’t give a shit about material things. The single most important thing in the world to him isn’t even a thing, but a person. His sister.

Sometimes, I think the only reason I’ve been so close to my sisters is because I see how Ren is with Luna. My father once told me it’s because of how they grew up, and that they only had each other for so long, which is why he’s so protective over her.

Ren has always been her protector, and I doubt that will ever change.

“If you want my honest opinion, I’d rather jump off a cliff, but…” His voice trails off.

You and me both, I want to say, but I keep the words to myself. The last thing I need is what I’ve said getting back to my father and him thinking I’m suicidal. Then I really won’t have a choice in coming or going.

“If you didn’t want to go, you didn’t have to. I’m sure your father would’ve allowed you to take some time off or do something else.”

Ren understands my life more than anyone else ever will, but that doesn’t mean he knows what it’s like to have a father who never takes no for an answer or to be dealt the blow that we were just dealt.

“Believe me, I made the best choice.” I speak through my teeth, staring off into the nothingness.

It wasn’t like I was going to a normal university, where I’d be bored out of my mind.

No, Corium University is where high-profile criminals around the world send their children. While normal parents send their kids off to state universities, expecting them to get a decent education and good job, our parents ship their children off to Corium, a school that will teach them how to become better criminals.

I don’t need training or guidance, but I want to go anyway. Which is why, for the unforeseen future, cold-ass Alaska will be my home. I want as many miles as I can get between my family and me. I can only hope that the more miles I put between us, the less the pulsing ache in my chest will bleed.

The sound of the helicopter propellers slicing through the air invades my ears, bringing me back to the present. I look up just in time to see my father’s plane—which brought us to this small Alaskan airport—taking off in the distance. The private plane dropped us here, and the school’s helicopter will take us to the university.

The wind whips through my hair, and I shield my eyes as rock and dust debris swirl around us. Ren is standing beside me as still as a statue. We’ve been best friends since his parents adopted him and his sister, Luna, when they were kids. Most people think we’re cousins, but I’ve always seen him as my brother.

It's a little ironic that most people don't even know my actual cousin because my uncle chose to keep his only daughter hidden from the world.

Shoving my hands deep into the pockets of my jacket, I exhale and start toward the helicopter. I don’t have to look back to know Ren is following me. We agreed to do this together. Well, more like I told him he had to come with me. Surprisingly, it didn’t take much convincing. I figured he would fight me since leaving meant being away from Luna, but unlike me, Ren will travel home to visit his parents and sister. He’ll call and talk to them.