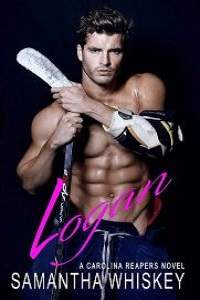 “Holy shit, do you think it’s a race?” Cannon Price gripped the passenger door handle of my R8 as I took the curve a little above the speed limit.

“For being the fastest skater in the NHL, you’re kind of a chicken. You know that?” I shifted as we merged onto the highway.

“If by chicken, you mean that I respect the laws of gravity, then sure, we’ll go with that.”

“I like the speed.” That was an understatement. I was pretty quiet in every other area of my life, and I knew it. I wasn’t a huge fan of the parties and shit that everyone else seemed to like about the NHL lifestyle, either. But I wasn’t going to complain about the signing bonus that paid for this sweet little ride, either.

“Remind me to drive next time,” he muttered, shaking his head.

I grinned and floored it, zipping around a car on the right and sliding into the lane ahead of it.

“If we’re late for the plane, Coach is going to kick you in the balls,” he reminded me as the Charleston skyline flew by.

“You’re the one making us stop at the library. I’m just trying to make up for lost time.” The engine purred as I sped up, and everything else in my head stilled. There was a peace to be had when you drove this fast. There wasn’t a lot of room in your head for the other shit that usually filled it up.

“We have an hour and a half. Chill. There’s the exit.” He lifted a very tatted up arm toward the offramp. “Watch—fuck me, Logan, I don’t want to die before we beat the shit out of North Carolina, okay?”

A smile lifted the corners of my mouth as I cut across three lanes of traffic—safely, I might add. I might be a little reckless behind the wheel, but I always knew where the line was.

“Turn right,” he muttered as I downshifted on the offramp.

“Remind me why we’re going to the library at six o’clock in the morning? The sun is barely up, and you think you can pick up a new book?”

“Because they were closed for New Year’s Day yesterday, and I need to—you know what? Just drive.”

I turned where he told me, and sighed in frustration as we stopped at a red light. I hated stopping. Stopping gave you time to think. To regret.

To dissect things you should have seen but didn’t because you were so desperate to ease the loneliness that you took the first fucking shred of affection someone showed you.

“Don’t what?” My hands gripped the wheel tighter.

“You have the Blaire face on. Next left.” He nodded at the light another block up, and when ours turned green, I started forward only to slam on the brakes for an early morning jogger who wasn’t watching where the fuck he was going.

“I don’t have a Blaire face,” I argued. “Fuck her, and fuck you for bringing her up.”

He shook his head as I pulled in front of the library. “No, go up here and turn right so we can park in the back.”

“You want to park in the back of the library?” I squinted against the rising sun as it streamed in between the buildings.

I put her in gear and took the R8 around the library like he said, parking a few spots away from a cherry red cabriolet. Cute.

“You can come in, or you can stay here,” Cannon said as he opened my door and climbed out.

He was like that—giving people choices without explaining himself. Guy never revealed more than he had to or let anyone in further than they needed to go.

Curiosity got the best of me, and I hopped out of the R8. I smoothed my tie and clicked the lock button as I followed Cannon into the building. Coach always demanded that we fly in a suit. He didn’t care if we changed into comfortable clothes on the flight, but by God, it was a suit and tie to and from the airport every time.

I caught the door before it shut on my face and stepped into the red brick building. It had been unlocked, so at least we weren’t going to get arrested for breaking into the library. I could just imagine Langley’s face if something like that hit the papers. Not that the head of Reaper PR would flinch, but she’d sure as hell laugh her ass off.

The smell of aging books and dust filled my lungs, but it wasn’t unpleasant.

“You can wait here or look around. Just give me about twenty minutes,” Cannon said over his shoulder as he walked away.

“It’s dark!” I hissed after him, like speaking any louder might awaken whatever ghosts hung out in libraries after dark.

He didn’t turn around, and with one turn to the right—toward a dim light I could see above the rows and rows of books, he disappeared.