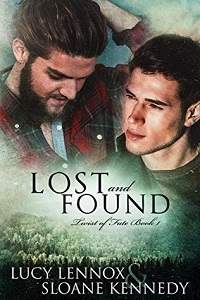 “No,” I said coldly just as the man in front of me smiled wide and stepped forward, clearly intent on embracing me.

“Xander?” he said softly, his voice a mix of confusion and hurt. I ignored him as the sharp pain in my belly threatened to send me to my knees.

“No,” I simply said again and then I started to walk away, not caring that what I was doing was beyond unprofessional. My only thought was to get the hell out of there. My dog, Bear, quickly came running after me, easily ditching the kids who’d been lavishing him with the belly rubs he assumed were his due.

Benny, please, I need you…

I shook my head in the hopes of casting that voice aside.

Fire crawled up my spine as I remembered how Bennett had looked at me that night… right before he’d turned his back on me. It had been the last night I’d seen him.

“You okay?” Jake asked with a confused look on his face.

I should have been relieved at the sound of my good friend’s concern, but it just made me want to stride off into the woods.

I did alone well. I knew alone. Alone never let me the fuck down.

“I’m fine,” I snapped. He was smart enough not to touch me, but his expression drew into a frown. Gary, the head of the wilderness expedition company I worked for, strode over to us from across the trailhead parking lot. Both he and Jake looked at me like I’d grown a second head.

I couldn’t help but glance back at the bus where over a dozen kids were mingling, along with several adults. But my eyes automatically sought out just one of those people. Dark hair, warm brown eyes, lean body…

“I know one of them,” I motioned with my head towards the bus. “We grew up together.”

Both men looked that way.

“No,” I interjected. “Bennett Crawford.”

I nodded. I’d never told Jake everything about Bennett and me, but he knew enough. “Fuck,” he whispered.

“What? What am I missing?” Gary asked.

“Xander, they’re here. They’ve paid… the kids are looking forward to this trip,” Gary began. He shook his head. “Come on, man, I’m counting on you.”

Guilt went through me as I studied Gary’s face. Yeah, he was technically my boss, but I worked freelance as a wilderness guide and was in high demand. I didn’t need the money from this group of inner-city kids, and I could easily find another company to guide for. But I also wasn’t the type of guy who just left people in the lurch. I looked back at the kids who were completely unaware of what was happening as they talked excitedly amongst themselves and went through their gear.

“I’ll take the Five Lake Loop,” Jake offered. My eyes snapped to his and he sent me a smile. I’d been friends with Jake for several years, ever since we’d met on an adventure expedition to Patagonia. When he’d moved to Haven, Colorado a year ago, I’d suggested Gary hire him as a guide. While I appreciated what he was trying to do, I knew it would never work. There was a reason I’d been selected to guide the group of older kids. I just hadn’t realized who the chaperones would be for those kids until I’d seen the names on the roster just moments before the group had gotten off the bus.

“Jake, you don’t know the Five Lake Loop and you’re not equipped to teach rock climbing or high-water river crossings yet,” Gary said kindly, voicing my own concerns. “Xander—”

“I’ll do it,” I murmured, cutting him off. As much as I wanted to just take off and disappear for a few days, I couldn’t let Gary down… or the kids. I automatically dropped my fingers to search out Bear’s head. The Newfoundland mix had become my shadow in the three years since I’d found him abandoned as a puppy in one of the campgrounds at the end of the summer camping season. I’d felt an immediate kinship with the dog as I’d watched him sitting among the remnants of a deserted campsite, staring in the direction of the narrow dirt road leading out of the campground.

Waiting for his loved ones to come find him, no doubt.

I turned and began striding back towards the group of kids who were starting to look a little bored. My hiking boots made crunching sounds on the sparse pebbles scattered across the unpaved lot. The late afternoon sun slanted through several tall pine trees just beyond the bus, and shadows danced along the overgrown tufts of grass at the edges of the clearing where the kids stood talking.