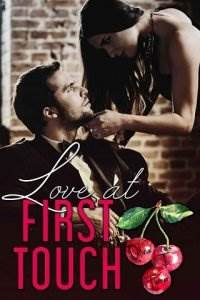 “Will you stop pacing around the room?” my brother Eli says looking exasperated. “You’re making me nervous.”

I grit my teeth as I walk back and forth along the large conference table for the twentieth time. Where is she?

It’s Monday morning at the office and I’ve been waiting to see this girl—my girl—since Saturday night. I loosen my tie as that prickly uneasy feeling (that’s been all too familiar lately) comes crawling up my skin.

“Leave him alone,” my other brother Luke says with a chuckle. “Cupid shot him with an arrow.”

“Yeah, right in the forehead,” Eli says with a laugh.

“Nah, it definitely landed in his dick,” my third (and thankfully last) brother Nolan says. “Look at the crazed look in his eyes.”

“Stop it,” I snap when I see the three of them staring at me. “I’m trying to focus.”

They’re all sitting around the conference table, looking relaxed with a carefree attitude like this is a regular old Monday morning meeting and not the epic, life-changing event that it is.

Victoria Brown will be arriving any minute now.

I’ve been counting the seconds—agonizing over each torturous one—until I can see her again.

My brothers and I run an investment company in Manhattan that our father started, Cline Corp, and the Brown family is our biggest client. Until Saturday, we had always dealt with her father Mr. Brown and then her brother Gabriel after Mr. Brown died. I knew that he had a daughter, but I didn’t know she was the most stunning angelic woman in the world until two days ago when we all attended Gabriel’s wedding.

I was sitting at the table with my sister Brooke, my brothers, and their dates when she walked over to introduce herself.

My heart stopped when I saw her approaching. It was like something had pierced my chest and gripped my heart with a fierce unyielding fist. I couldn’t breathe. I couldn’t take my eyes off her.

Long strawberry blonde hair that had me trembling, stunning hazelnut eyes that annihilated me with just one look, and a body… God, that body… I’m still aching all over when I think about how it looked in that red dress.

My eyes never left her after that moment.

The conversation kept going around me, but I didn’t hear one word after that beauty stole my attention and held it until she left.

I was planning on talking to her. I was going to ask her to dance. Hell, I would have thrown her over my shoulder and stole her away until she agreed to marry me (the thought had crossed my mind a few times), but after dinner she disappeared.

Gone. Vanished. Out of my life.

My muscles started to get tight, my neck strained, my jaw clenched, and I got a sharp edgy feeling all over when I realized she wasn’t coming back from the bathroom. I snapped at my brothers when they told me to relax, but the only thing keeping me from going over the deep end was knowing that she was coming into the office today for a meeting.

I close my eyes and take a deep breath. She’s coming. Here.

I hate not having her in my sight. I haven’t even said one word to her and I’m already obsessed. I already know she’s mine.

My brothers are laughing at me, but I just ignore them. If they only knew what yesterday was like. This is me under control.

It was pure torture knowing that she was out in the world and I wasn’t beside her with my protective arm around her, breathing in her beautiful intoxicating scent.

“Westin,” Nolan says, snapping me out of my daze. “I know you like this girl—”

Like this girl? He doesn’t get it. I’m utterly consumed by this girl. She’s not just some school girl crush. She’s the one. She was made for me. She’s mine.

“—but the Brown family is our biggest client. Can you control yourself?”

I take a deep breath as all three of them stare at me with worried faces. I don’t know what I’m going to do.

Hopefully, I’ll be professional, but I wouldn’t be surprised if I kick the three of them out and have my way with Victoria on the conference table.

“Westin?” Eli says with a shaky voice when I don’t answer.

“Oh, shit!” Luke hisses as he glances out the window into the hallway. “She’s coming.”

I swallow hard as I straighten my tie and shake my hands out. I have to control myself. I can’t ruin this. I won’t be able to live without this girl in my life.

Nolan’s eyes are on me as I sit at the head of the table and wait. Every second feels like an eternity. I can hear my heart thrashing in my ears and can feel it thundering through my body, but I’m motionless and appear to be calm from the outside.