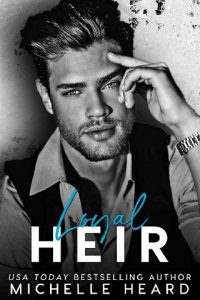 “Hell no,” I growl as my eyes land on my cousin and my best friend. “Go change. You’re not going out dressed like that.”

“What’s wrong with how we’re dressed?” Carla asks, her eyebrows shooting up while she glances down at her way-too-short dress before looking at Aria’s.

I swear they do this on purpose, just to drive me insane.

“If the two of you go to the party looking like that, I’ll spend the entire night having to fight off guys. I’d like to have fun as well.”

Carla begins to pout. “All the girls will be dressed like this.”

Aria, who’s been my best friend since we were in diapers, moves closer to me and taking hold of my hand, she gives me a pleading look. “Come on, Forest. We’re going to be late if we have to change now.”

My eyes drop to her legs, tanned, toned, and… yeah, way too sexy with those heels on.

“Come on.” She grins as she nods toward the front door.

Damn, they’ll be the death of me one of these days.

Just then the door opens and Uncle Mason, Aria’s father, who’s also my godfather, comes in. He’s best friends with my father, and our families go back four generations. He takes one look at the girls and instantly shakes his head. “Over my dead body.”

“Daddy.” Aria tries the same pleading look on her father.

“No.” Uncle Mason looks at me. “You were going to let them go out dressed like that?”

I shrug. “I was outnumbered.”

He shoots a glare at the girls. “Either you change into something that covers a hell of a lot more skin, or you’re not leaving this house.”

The girls let out huffs, but at least they go back upstairs.

Turning my attention to Uncle Mason, I say, “Thanks. They never listen to me.”

Uncle Mason throws his arm around my shoulders and pulls me to the living room. “Don’t worry. I’ve got your back.”

I let out a chuckle, and as we sit down to wait for the girls, Uncle Mason asks, “Are you going to the end of summer break party Aria mentioned?”

“Yeah, we figured we’d go say bye to all our high school friends.”

“Are y’all moving to the dorms tomorrow?”

“We’ll probably take our stuff over on Sunday. Aria and Carla want to get some last-minute shopping done.”

The three of us are starting at Trinity Academy this year. Where Carla and I are doing our MBAs, Aria is getting her degree in art. With her older brother, Hunter taking over Uncle Mason’s position at our company, CRC Holdings, they’re okay with Aria following her passion. She’s fucking good at painting abstract scenes, and I can already picture her owning a gallery one day.

Uncle Mason nods, then asks, “Are you speaking at the welcoming ceremony?”

“No, Fallon will be speaking on our behalf,” I answer.

Fallon, my sister, is only a year older than me. She was in an accident a couple of months back and gave us one hell of a scare. Luckily, she and her fiancé, Kao, have fully recovered.

“She’s doing well.” I smile at Uncle Mason. “Kao and Fallon finally found a house, so she won’t be living in the dorms with us.”

“At least the girls will have you and Noah,” Uncle Mason lets out a sigh.

“We’ll look after them,” I reassure him.

Aria and Carla come down the stairs again, this time dressed in matching red silk blouses and jeans. Even with heels on, Aria’s still a head shorter than Carla, who’s wearing boots.

“That’s much better,” Uncle Mason says, a relieved smile spreading over his face.

Uncle Mason looks at me. “No drinking.”

“Of course,” I chuckle. Uncle Mason reminds me every time we go somewhere. Not that we always listen, though.

Walking out of the house, I say, “Everyone from school will probably be at the bonfire. Don’t disappear from my sight without telling me.”

“Yes, Forest,” Carla says, rolling her eyes at me.

Aria gives me a smile. “Aww… it’s just because he loves us.”

“No, it’s because your fathers would kill me if something happened to the two of you.” And yeah, it’s because I love them, especially Aria. She’s the other half of my soul.

Aria shakes her head, and before she climbs in the car, she grins at me. “I know it’s because we’re your two favorite people.”

Yeah, she’s not wrong. There’s nothing I wouldn’t do for the two of them.

I hear Aria’s laughter above the music, and it instantly brings a grin to my face.