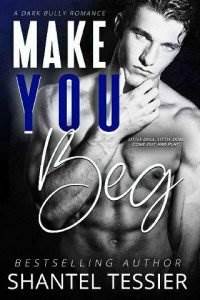 “Sex Metal Barbie” by In This Moment

“Him and I” by Halsey and G-Eazy

“Popular Monster” by Falling In Reverse

“Shoots and Ladders” by Korn

“The Devil In I” by Slipknot

“Whore,” by In This Moment

“Nails” by Call Me Karizma

“Why Are You Here” by Machine Gun Kelly

“Down with the Sickness” by Disturbed

Everyone in the courtroom stands. I let out a shaky breath and run my sweaty palms down the black pencil skirt and adjust the matching blazer as the judge makes his way to his chair. My heart beats rapidly in my chest with dread and doubt. I’ve told myself not to worry, but I can’t seem to stop. There’s this pit in my stomach that I can’t ignore. It’s had me nauseous for weeks, and I haven’t been able to keep anything down. Some would be happy about losing ten pounds, but not me. I didn’t have that kind of weight to lose in the first place. Anxiety is a bitch, and I can’t seem to beat her no matter what I do or tell myself. She’s like this imaginary friend dragging me farther out in the deep depths of an ocean, fully aware I can’t swim. I’m trying to keep my head above water, but it’s filling my mouth as I try to cry out for help. Knowing damn well that there’s nobody around to hear me.

I jump when my father rubs my back from where he stands on my right. He notices and gives me a reassuring smile. His blue eyes are soft, but I see the worry lines around them. He hasn’t said, but I know he’s terrified of what’s to come. If this doesn’t go the way it should …

Judge Mayes speaks, getting everyone’s attention. “Please, be seated.” The sound of everyone returning to their seats fills the room. “The court has brought the jury back into the courtroom having received a message that the jury has reached a verdict. Will the foreperson of the jury please stand?” he asks. The man gets to his feet, fixing his already straight tie. “Have you reached a verdict?”

That pit gets bigger, and my breathing more ragged. This is it. The jury’s answer will define the rest of two lives.

The foreperson nods once. “We have, Your Honor.”

“Can you please hand the charge and verdict form over to the bailiff, who will deliver it to the courts so I can ensure that it’s in proper form?” Once he has it in his hands, he continues. “The verdict is in proper form. Will the defendant please stand?”

At the front of the room, the boy gets to his feet along with his attorney. Well, he doesn’t look like a boy. He’s every bit of six foot three. His broad shoulders and muscular build intimidate men twice his age.

He has always had this air about him—like he was unbeatable. He’s a cocky son of a bitch who gets everything handed to him. His daddy buys it for him, or he beats it out of you. Either way, the outcome is always the same—he wants it, he gets it. That’s what makes this situation even worse. This is what fills me with dread.

Even right now, in a room full of people waiting to hear if he’s going to spend the rest of his life in a six-by-eight cell or will be free to walk, he looks unfazed. His head held high; I can’t see his face from where I sit, but I bet he’s having to fight back a smirk. I’m having trouble controlling my breathing, whereas he looks pretty confident for a man facing a life sentence. At the young age of seventeen, he’s being tried as an adult because of me.

His three best friends sit in the row behind him with their parents at their sides. Rellik and Law keep giving me threatening looks over their shoulders. Scout hasn’t even glanced my way. He hasn’t always hated me, but he does now. They all do. We were friends, best friends, until I turned on one of them. Now, I’ve been shunned, thrown away for my betrayal. If you can call doing the right thing betrayal.