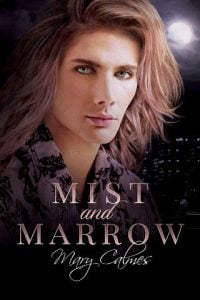 Whenever I heard people say, “I wasn’t made for hard labor, or life on a farm, or even being in love,” I always thought… the thing I wasn’t made for was running. Running was vile. There was no part of it I enjoyed. Even when I was a wolf, I always worried about what I was running through or in. What if I got Lyme disease from a tick? What if my fur got all sticky from some gross oozing weed or tree? Really, the whole experience was simply revolting. No self-respecting omega, of which I was one, was raised to break a sweat in any form they took, man or beast. We weren’t even supposed to glisten. If one had to indulge in gardening—another pastime I never understood—the only acceptable interaction between the outdoors and dirt actually took place inside, as in a greenhouse with temperature-controlled everything and the spritz like the veggies got from the produce section of the grocery store. Not that I’d ever shopped for anything but art, fashion, or jewelry… or eye cream, but I’d seen it on television.

Omegas were, as a rule, beautiful ornaments that resided in the homes of only the richest alphas. Just because that ship had sailed for me didn’t mean that I suddenly became a person who enjoyed perspiring. At the moment, however, sprinting hand in hand with Miss Tabitha Wellington of the Kinsley-Wellingtons of Mountain Brook, Alabama, a suburb of Birmingham, I could feel the sweat running down my back into the crack of my ass. The only saving grace of my present situation was that my friend Avery Davenport was not around to witness my horror. I would have never heard the end of it if he caught me doing anything so completely out of character as running.

“Luna,” Tabitha whined beside me as we took the stairs up to the L so we could get on the train and take it to Oak Park, “I think I’m going to pass out.”

“You won’t,” I assured her, “because if you do, you have to bond with—what’s his name again?” I asked, hoping to distract her from her swoon.

“Yes, Weston,” I said, thrilled that we’d cleared the top step. If she fainted now, at least I could drag her onto the train. “And didn’t he say he wanted children right away? And you want to go to cooking school, do you not?”

“I do,” she affirmed, and her grip on my hand tightened as we raced onto the L and dropped into a couple of seats as the doors closed and it took off.

“And your dear friend Marnie has graciously set you up at a wonderful school in Miami with the new name we arranged for you, so let’s focus on that.”

Tabitha turned to face me. “I’m so sorry I messed up.”

Slipping my hand from hers, I put my arm around her shoulders and gave her a little squeeze. “It’s all right, dear. We’re not all born to be James Bond. We don’t do this cloak-and-dagger shit on a regular basis.”

Chuckling, smiling through new tears, she nodded. I was glad she was better, because we still had a bit of maneuvering to do before she was safe.

Normally things were easy. As a rule, even though I was, for all intents and purposes, making people disappear, it wasn’t dangerous. She had made her position, and mine, precarious when she veered off course.

I had been at the art gallery at Eighteenth and Halsted, then walked around the corner on a chilly Thursday morning into Ends of the Earth, my vintage jewelry and antique store, and was on my way toward my office when I found a young woman standing at the jewelry counter. It was not odd to discover people admiring the baubles, but she stood out because she was shivering. Since it was March in Chicago, the fact that she was cold was not a surprise. But even as she stood there trembling, I noted she was still mesmerized by something in the locked, shatterproof glass case.

“You have good taste,” I murmured when I slipped around the corner of the counter alongside her to stare down at the strand of Tahitian saltwater pearls with a diamond clasp.

Her breath caught, and she looked up at my face. I saw it then, the red, swollen eyes, heard her sniffle, and knew, of course, she’d been crying.

“Whatever is the matter, darling?”

Sharp inhale of breath. “I messed up.”

I gave her the warmest smile in my arsenal, which I’d been told by many people still presented as a trifle fake. The problem was, I’d been schooled for so long to keep every emotion locked away that it was difficult, nearly impossible, really, to do away with the artifice. “I’m certain that together we can undo whatever entanglement you currently find yourself in.”