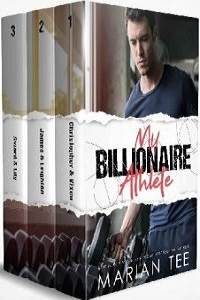 Fresh out of the shower, the first thing William Stanhope saw was his girlfriend curled up on the rug in front of the TV and looking irresistibly cute in her Alice in Wonderland pajamas.

Too damn irresistible, really, that he just had to...

Since having Cassidy call him by his name was still rare, hearing it had lust instantly heating his blood, and William bent his head to give his girlfriend a long deep kiss that had her whimpering against his mouth.

When the kiss ended, Cassidy felt like she was still floating, and a small part of her still unable to believe that she got to live the rest of her life with a man like William. Although they had only met three months ago, so much had happened since then. From being William's personal assistant, she had become his girlfriend, and while there wasn't a day that the billionaire failed to make Cassidy feel how much he loved her...

It still felt weird sometimes, Cassidy acknowledged to herself, knowing that a billionaire like her boyfriend was so into her—-

The sound of William's mobile phone ringing cut into her thoughts, and her heart did a little backflip as she listened to him murmur a brisk 'hello'.

Cassidy knew how silly it was to be infatuated with every little thing her boyfriend did, but she couldn't seem to help it. Even though she still struggled to say those three little words as often and as casually as William did, that didn't mean she loved him any less.

In truth, Cassidy was secretly worried that she loved him a little too much, with the way her toes would always curl, like they were now doing, and all because she found William in work mode so terribly sexy.

She loved the way his gaze would turn contemplative when tackling a problem for the first time, and she especially loved the way his British accent would become more prominent when he felt particularly satisfied.

But there was nothing she loved more, Cassidy thought helplessly, than being able to listen to all those things...while enjoying the sheer bare-chested gorgeousness that was William—-

William, having suddenly glanced her way, caught Cassidy staring and gave her a wink. Cassidy made a face in return, but when he promptly lied back on the rug and used her lap as a pillow...

Her heart did a little somersault, and Cassidy bit back a sigh. She really should just accept the fact that she was head over heels in love with this man, and that would never change.

Glancing back at William, who was still on the phone, Cassidy couldn't help but let her gaze drift a little bit further, and she found herself swallowing hard at the way his V-shaped muscles went all the way down until she was now staring at his low-slung sweatpants...and the huge, stiff bulge—-

Her gaze flew to the billionaire in shock, and it was then she realized that while she had been gawking at him like a sex-starved idiot, William had been watching her do it the entire time!

"I'll call you again once I figure things out." William managed to end the call with only seconds to spare, and before Cassidy could shove him off her lap he had already rolled off and out of her reach—-

The rich sound of William's chuckle had Cassidy rolling her eyes. "Not funny!"

"Not at all." William, now that there was enough distance between him and his girlfriend, had no qualms in agreeing. "It was rather hot, actually, having you ogle me—-"

"And you know..." William's voice turned solemn. "You can always do more than—-"

It was Cassidy's phone ringing this time, and when his girlfriend's lips curved in the cutest I'm-sorry smile—-

The billionaire suppressed a sigh. "Go on." He could never win against that smile of hers, and William simply moved back to sit beside Cassidy. As he put his arm around her, he was now close enough to hear her caller's voice—-

Cassidy choked in surprise when William suddenly fished her iPhone out of her hand. "Uh..."

But William was already talking to Christopher "Kit" Masterton. "What the hell are you calling my girlfriend for?"

"To prank you," the world's most famous football player from England said easily. "I owe Konstantin Manolis a favor, and he says you'd understand that your girlfriend is to blame for this."

Cassidy blinked when her boyfriend suddenly started cursing up a storm. "What happened?" she wanted to know.

You did, love, William thought resignedly. While the billionaire had always known that Cassidy's love for pranks would one day cause trouble, he hadn't expected that he'd be the one made to pay the price.

They should really have a talk about that soon, William mused. While he'd never dream of ever getting in the way of her fun, maybe he could at least get Cassidy to cut back to one prank a week?