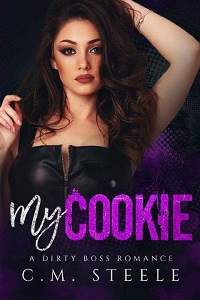 I’ve just checked into my hotel room in downtown Chicago when my besties text me that they’re on their way here and only a few minutes out. “Yay,” I squeal. Technically, there’s no reason for me to rent a hotel room for the night when I live nearby, but my brother wanted to spoil me rotten with all the amenities before my big day tomorrow. Besides, they have a very nice bar downstairs for us to party in without needing to alert my brother’s guards.

Lacey and Casey are out to cause trouble tonight, so we all promised to wear something super sexy tonight and well, I’m just a very good friend. I found this faux leather outfit, and I’m obsessed. It’s not a dress I’d ever wear outside, but for them, I’ll do it.

Scurrying my bum down to the lobby, I spot two guys heading into the bar and I nearly trip because the tall one’s profile immediately grabs my attention. Every feature on his face fits perfectly, like it’s been chiseled out of the finest marble from the greatest sculptor. Lips that beg to be kissed, even with that scowl forming. I wish he’d turn all the way so I could see all of him. My body is alive with desire for the first time, and I crave more. Damn, I need a drink now.

“Mare,” Lacey shouts, causing my tall distraction’s scowl to deepen even though he refused to look in the direction of the noise. I spin around to the revolving doors and see my besties coming in, looking hot in their outfits. We’re all wearing little black dresses, but I’m the only one in black heels. The girls both have matching black dress sandals.

“Case, Lace, I’m so glad you’re here.” I throw my arms around them, and we squeeze tightly and giggle.

“So how about a drink and celebrate a bit before they find us,” Lacey whispers in a conspiratorial, hush-like tone.

“They find us?” I ask. I look around the hotel lobby, wondering if she’s referring to my brother’s guards.

“Yeah. My boss seems to think since my promotion that I’m his personal assistant at his beck and call. He can go fuck himself.”

“That’s cause you want him to fuck you,” Casey teases.

She slaps her arm and stomps her foot. “Bish, don’t be calling me out like that just because he’s fine as hell. The man has no idea I’m anything more than a workhorse. ‘Lacey, do this. Lacey, do that.’ I want to throat punch him.”

“I think you like him bossing you around,” I tease, making sure I’m out of slapping distance.

“Whatever. I need a drink now before he starts texting me about his meeting agenda that I’m totally ignoring because it’s not due until Tuesday.”

We walk into the bar and I immediately look for the men who walked in, but I don’t see them. I’m not even sure why I care. It’s not as if I have the balls to do something given that I’m a twenty-one-year-old virgin for a reason. It might be the fact that I have an overprotective older brother who has had guards watching over me since he could.

We’re celebrating Lacey’s promotion at work and my graduation from a culinary program. It was an eighteen-month set of courses on baking, which I honestly didn’t need but wanted. Our waitress comes over and takes our order for a round of shots and three mixed drinks. I think that’s going to be the totality of my drinking since I need to be up early and baking my heart out to earn a spot that I rightfully deserve with one of the top bakeries in the country.

“Girl, that guy over there hasn’t taken his eyes off you,” Casey says, dipping her head to the side. I can’t see him unless I turn, and that would be completely obvious.

“Mare, just go ahead and look to your left. Trust me—you won’t be disappointed,” Casey presses.

“That hot fucking guy sitting at the table with another man,” Lacey agrees. I turn to my left and follow their gazes. Meeting his intent stare, I let out a gasp. Holy hell, it’s the same man that I saw earlier and this time, he’s the one staring at me. Goodness, the man is equally gorgeous from the front.

He has medium brown hair that’s cut short and textured yet neat with the sides and back shorter. I want to run my hands through it, wondering if he looks even sexier with mussed-up locks. Suddenly the hotel bar has gotten twenty degrees hotter and a lot smaller. I rub the back of my neck under my long hair ever so slightly as if there’s already sweat beginning to form.

He winks at me, and a blush spreads across my cheeks and I turn my head back to our table. “Come on, Mare, don’t be shy. He looks like he could finally get you out of that situation you’re in.” She gives me a nudge with her elbow and wink.