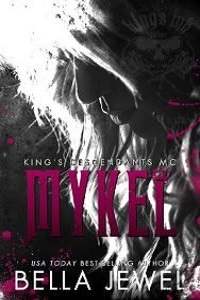 Hmmm, no, that doesn’t work.

Good lord, what am I? A cowboy?

Whatever. Let me just get right into it.

There, that wasn’t so hard.

I’m not going to blabber on about how strong and fierce I am.

Or proceed to tell you how broken or damaged I’ve become.

No, I’m just going to tell you that I’m me. Just me. Waverly.

I am all of those things, but I’m also so much more.

I’m helping a club—a club that needs me to bring peace back into its world.

If you had asked me if I’d be working for a biker club six months ago, I would have simply laughed in your face.

I mean, a biker club? Come on.

Yet here I am, doing the unthinkable. Penetrating the deepest, darkest parts of that world.

Pretending to be something I’m not.

I’ve got this, though.

That is one thing about me you should know—I won’t let them down.

I won’t crack under the pressure.

I won’t break, no matter how much horror I see.

There are lives at stake; there are people who need me.

Not a single thing will distract me from the mission I’m on.

At least, that was what I first thought.

Now I’m tangled up in a world I can’t even begin to understand.

Now I’m dealing with feelings that are foreign to me.

Feelings for a monster.

Feelings for an angel.

This is a literal battle between good and evil, and I'm living it.

Who are these men, you ask?

You’re just going to have to start from the beginning.

I stare into the setting sun. The array of colors drift off into the horizon as slowly, night begins to fall.

Am I strong enough for this? I only let the thought flitter through my mind for a second

I turn and face Alarick, who is staring at me with an angry expression on his face—an expression that tells me he’s not going to stop hollering my name until I listen, until I pay attention, but I’m finding that incredibly difficult right now. “What, Alarick? Can’t you see a girl was off in her own little world?”

He crosses his arms across his big chest, and then mutters, “What happened last night?”

The night I stayed with Dax and his little crew. The night I met two other girls. The night they slowly started to corrupt our minds. We were like perfect little puppets on their masculine biker strings. Well, they were; I certainly was not. I know exactly the kind of man Dax is. I also know that he’s so clever and so scarily kind to those women that they honestly believe their worlds are about to become a whole lot better.

He takes them from their miserable lives, from their nonexistent families.

He introduces them to kind men, rich men—men who promise them homes full of love and money for the rest of their lives.

Then, oh, only then, do those women see the true horror—the true monsters hiding behind the masks.

There is no escape.

I shudder and focus my attentions back onto Alarick. He wants answers—of course he does. They all do. My sister, Zariah, has been badgering me all day for some. I haven’t given them to her because, well, I’m not sure she’s the right person to give them to. Alarick, on the other hand? He is the right person. He’s the running this whole operation. This whole attempt to take down Lucifer and all his demons.

The king of hell.

Because that’s exactly who he is.

He’s like a fallen angel, thrown into the pits of hell. That’s Dax. An angel, by all accounts, but the devil where it really matters.

I shake my head and focus on Alarick.

“Well, burst it on me, yeah? We need to know what happened last night! Everyone was fuckin’ worried about you.”

Of course they were. They thought he’d sold me.

No, we still have time.

“He took us on a trip to this incredible lake house. It was amazing, to be honest. We got to dance and sing and drink and eat. Those girls, the ones who are truly from a bad world, they thought they’d won the lottery. He introduced them to some men—some very rich, very attractive men. Everyone except me, which I found to be a little strange . . .”

“He didn’t introduce you to a man?” Alarick murmurs, narrowing his eyes.