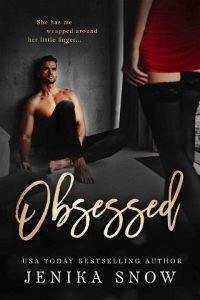 I should have been smarter in what I wore.

God, I felt dumb as hell, but I wore it for one reason and one reason only.

So that one man noticed me, a splash of vibrant red amongst a sea of bodies.

Just thinking his name set my blood on fire.

He was Bernadette’s—my best friend's—older brother. Oli was someone I should probably have stayed away from, but that would have been as easy as holding my breath for the rest of my life.

I had only moved to town a year before, having finished up half my senior year at a new school, no friends, no family close by, and feeling so alone. But Bernadette and I had become fast friends, instant. It was like we’d known each other our entire lives.

And I’d wanted Oli the moment I saw him, the first time Bernadette took me to her house to meet her family and her older brother was there.

I’d been eighteen at the time. He’d been twenty-five.

He’d kept his eyes locked on me the. Entire. Time. It had unnerved me. It had made me feel noticed in ways I never had been before.

I snapped back to the present and breathed out slowly. Bernadette was just as excited as I was for the match tonight, her energy bursting from her as she had this perpetual grin on her face.

She wasn’t even into fighting, not like that. What she was into was watching all the half-naked dudes in that ring pummeling each other. I often wondered if she came here because of a specific fighter, but I never asked, because honestly I was afraid she’d start probing my reasons for wanting to come here every Saturday… every time Oli fought.

God. Oli. Just thinking his name did physical things to me.

Here I was, a nineteen-year-old virgin who thought about what it would be like—feel like—to have Oli above me, pounding all those hard, male inches into me, stretching me, splitting me in two.

Even now, just thinking about it had me flushed, sweating… wet.

I should have been humiliated, knowing everyone around could practically hear what I was thinking, but the room and crowd were so jacked up for the fight that no one paid me any attention.

There’d never been a person in my life who personified the opposite gender like Oli did, who made me needy and want filthy things I’d only ever imagined.

Thick muscles stacked on each other.

Champion of the underground fighting circuit.

He was a testosterone-filled bad boy who had my body liquid whenever he was near. And he was always near. Always.

He always had his eyes on me. Tracking my movements, making sure he was always there, beside me, keeping anyone he didn’t seem worthy away from me.

And no other male was ever worthy of my attention.

He was more animalistic than human, more deadly than gentle. He was a giant with fists that should have been illegal for how powerful his hits were, for how many men he took down with a KO.

And even though I knew how dangerous he was, even though that should terrify me, frighten me, I’d be lying if I said it didn’t turn me on.

Watching him fight had my pussy clenching something painful.

It was fighting season, and every Saturday, there was a match. No one could defeat Oli in the ring. Plenty tried, but I never missed the fear I saw flash across the other fighters’ faces when they looked at him from across the ring. I had to give them credit though; they put on a good show, even if they knew he would kick their asses.

Oli was stealthy, calm, collected. He didn’t boast, didn’t act like he was about to pummel another human, spill their blood, and let it splatter across his chest like war paint.

Confident. That’s the perfect word to describe the guy I was head-over-heels in love with. Although, he wouldn’t know that. Not like I’d ever told him. I wasn’t as strong as he was.

I followed my friend Benny down the rickety steps to the makeshift fighting ring that had been erected for this fight. My blood sang with the thought of seeing Oli, especially when he fought. The pure animal magnetism he exuded while in that ring was certainly a hint of his experience.

I never missed a fight, not if Oli was in the center of the room. It was a brutal sport, no rules, no referee, nothing to stop the other men from having their life taken. But Oli was controlled, always stopping when his opponent went down cold. And despite the crowd chanting for more, for blood to spill in a river at his feet, he never continued.

“This way,” Bernadette said as she led us through the crowd. It didn’t matter that she should have been considered royalty because of Oli’s status down here in the very pits of human depravity. No one cared as they pushed and shoved, trying to get closer. “I see a spot close to the ring.”