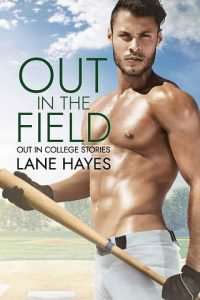 The rain came out of nowhere. Blue skies turned an ominous gunmetal gray as a strong wind whistled through the campus. The normally bustling quad was a ghost town. Most students kept to the perimeters of the grassy areas under the eaves as they made their way to class. The smarter ones wore thick hoodies or at least carried an umbrella, while others held books or a backpack over their heads as they raced between buildings. Me? I was about to get soaked.

I tucked my American Studies notebook and my iPad under my long-sleeved T-shirt as I eyed the distance to the parking lot. There was no way I’d make it to my car without getting wet. I didn’t care about my clothes or my hair, but I’d be screwed if anything happened to my stuff. I heaved a frustrated sigh before ducking my head and making a run for it. Halfway to my destination, someone bumped into me, accidentally dislodging my notebook. I headed for cover to adjust my burden, shaking my head and swiping at my eyes before glancing around the archway connecting the math lab and Granding Theater.

I could safely say I’d never had an occasion to go inside either building. I’d made an effort to steer clear of subjects that confused me, and math and drama were near the top of that list. Math, for obvious reasons, and drama because theater people intimidated the hell out of me. Maybe that sounded silly, but I couldn’t decide if I was in awe of their bravery or if I thought they were flat-out crazy to want to perform in front of a crowd for fun. What did I know? I was a psych major. But first and foremost, I was a baseball player.

At a private college like Chilton, athletics usually took a back seat to scholastics. But our baseball team rocked. We’d won our conference championship title for the past three years straight. And though our season had just begun last week, our chances of a four-peat were looking good. Not great, but good.

I cast my gaze to the dark sky and grumbled unhappily. We couldn’t practice in these conditions. No doubt Coach Glenn would have us meet at the gym on campus instead of on the field today. I’d check my messages when I got to my car. I had forty-five minutes to head home, grab a bite to eat, and pick up my workout bag. Plenty of time, I mused as I stepped away from the wall and—froze at the sight of fairies dancing in the rain.

For real. I couldn’t make it up if I tried. The three young women and one guy wore tights and some kind of weird costume involving glittering leaves sewn over green leotards. They held hands as they pranced around the grassy area in front of the theater, with their faces turned to the heavens. Very strange. Any other day of the week, I would have rolled my eyes and walked the other way…fast, because like I said, theater people freaked me out. And the diehard ones who were so dedicated to their craft, they were willing to risk pneumonia on a day like today had to be slightly imbalanced. But the guy looked kinda familiar.

He had short platinum-blond hair and the physique of a dancer or a gymnast. His calf muscles looked like sculpted marble in those skin-colored tights. He was hot too…high cheekbones, a sharp jawline, and a stunning smile. Theater geeks aren’t my type, I reminded myself as I straightened from the wall.

I was about to head to the parking lot when the platinum cutie broke away from his friends and skipped to a nearby tree. Yes…skipped. He brushed his palms against his thighs and called out “Ready?” before doing a series of cartwheels and landing two feet away from me. He bowed dramatically and lifted his arms above his head, circling his hands as if encouraging applause. I tucked my iPad under my arm and clapped along with his friends ’cause let’s be honest, sticking a perfect cartwheel in the rain couldn’t be easy. He flashed a flirty grin over his shoulder, then stepped forward and fell flat on his face.

I raced to his side unthinking and crouched low. ““Hey, you okay? Let me help you up.”

I tucked my belongings to my chest, then reached for his elbow and pulled him upright. I led him to shelter under the eaves before attempting to see if he’d hurt himself. Not the correct procedure, I know. But I couldn’t afford to have my iPad crap out on me because of exposure to the elements. And he seemed all right. In fact, he was more concerned about the rip in his tights than the scratch along his forearm.