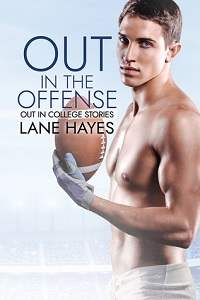 “You cannot teach a man anything; you can only help him find it within himself.”—Galileo

The late afternoon sun glinted off the bleachers and sent a prism of light across the Astroturf. The ultra-green hue gleamed even brighter than usual at this time of day and contrasted nicely with the longer shadows. It might be eighty degrees in the shade still, but fall was definitely coming. We were a few weeks into the new school semester and three games into our football season. Thankfully, we’d won by respectable margins. A minor miracle, considering a slew of our better players graduated last spring. Starting over with a mostly unseasoned crew wasn’t optimal, but so far, things were looking good.

Which usually meant bad news was on the horizon.

Hey, I wasn’t a downer. If anything, I considered myself a realist. Nothing good lasted forever—including winning streaks. I signaled a play to Gonzalez, one of the faster running backs on our team, then pulled my arm back and launched the football into the air in a high, tight spiral. It sailed in a perfect arc for sixty yards and hit my target right in his hands. Gonzalez secured the ball and ran like the wind toward the end zone.

I laughed when he let out a loud whoop and broke into a ridiculous victory dance. A few of the other guys joined in, but the second our head coach, Flannigan, blew his whistle, everyone hustled off the field. I waved absently to a couple of the assistant coaches chatting on the sideline as I jogged toward the locker room and then groaned when Coach Perez stepped aside and motioned me over.

Mike Perez was our offensive coordinator and an all-around good guy. But the dude could talk, and it had already been a long day. The last thing I wanted to do was go over additional plays. Surely it could wait until morning.

I veered left to meet him and pulled off my helmet. “What’s up, Coach?”

Perez was a husky man in his late thirties with jet-black hair and a receding hairline he hid with a ubiquitous baseball cap. He was about five inches shorter than my six four with a completely different build. He looked more like a linebacker now than a former quarterback, but twenty years ago, he’d played my position at a private college similar to Chilton. He knew the ins and outs of a Division-Three program at a school better known for academics than athletics. I respected his football acumen, but I liked him as a person too. He was quick to laugh and had a habit of talking about his wife and kids that was kind of endearing. I thought it was cool that as much as he loved the game, his family always came first.

“That arm’s looking good, man. How are you feeling?” he asked, adjusting the rim of his cap.

“Great.” I squinted and gave him a funny look. “Don’t tell me you’re adding a complicated play I need to perfect in two days.”

“Nah.” He nodded at a couple of guys passing by and then inched closer to me in a maneuver that clearly indicated this was a private conversation. “I like what we’ve got down.”

“Oookay…” I wracked my brain, wondering what I’d done wrong while I waited for him to continue. Practice went well today. My arm was strong, my decision-making was on point, my feet were sure and—

He tilted his head in what could only be described as a “concerned parental” look before continuing in a lower tone. “She said you’re failing statistics. She also mentioned this is the second time you’ve taken the course and because you’re a senior, it’s your last chance to pass if you’re gonna graduate on time. Apparently, she’s contacted you about tutoring but you either haven’t acted on it, or you’ve ignored her messages entirely. Why?”

I let out a frustrated huff and pushed my hand through my hair. “It’s the middle of September. There’s plenty of time to—”

“To do the right thing,” he intercepted. “It’s a two-part course. You can’t afford to fail, man. One of the perks of being a student athlete is having immediate access to first-rate tutoring. You have to sign up, Rafferty.”

I frowned but nodded my acquiescence. “Okay. I will.”

“Good. I need proof it’s done before I put you in the game Saturday.”

“Wait. What?” I pulled at the sleeve of his burgundy polo shirt and tried to ignore my suddenly accelerated heartbeat.

Coach glanced down at his sleeve until I released my hold, then glowered at me. “What’s the problem? I’m covering my ass while you do yourself a favor and get the help you need. It’s a win-win, see?”

I scratched the back of my neck and grimaced. Fuck. I knew it. Wasn’t I just thinking something would blow up any second? There had to be a way around this. Maybe I knew someone who could help me. One of the guys on the team might know statistics. I did a mental roll call of my teammates while my coach fixed me with a laser-beam, no-bullshit gaze.