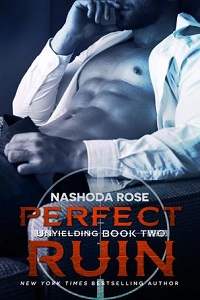 “HELLO, MOTHER.” I strode into the room. The two white candles perched on pedestals at either side of the door flickered as I passed, causing a glimmer of shadows to dance along the stone walls.

“Darling,” she cooed, as if pleased to see me.

We both knew different. She hated me, but the feeling was mutual.

Bitch had kept me waiting three weeks in France before giving me an audience. Finally, I’d been summoned like a fuckin’ pet to its master by one of her minions. The waiting was a ploy to unnerve me. Unfortunately for her, it failed. Patience came easily to me as I’d spent my life having to live up to the word.

As a child, I’d been kept waiting for food, for sleep, for the pain to end. I’d learned that time was better off being nonexistent, to never wait for something to occur, but instead, to ensure that anything I wanted would happen and that time had no significance.

There’d been a glitch in that way of thinking—London. Time suddenly mattered and that fucked with me.

She didn’t bother rising from behind her large mahogany desk that faced the ornate, stained-glass window. She merely tilted her chin at an upward angle to glance over her shoulder at me. Her slender fingers went to the pearl necklace around her throat and she caressed the beads.

“A shame I missed you on my last visit to Toronto. Brice told me you were in New York checking up on Dr. Westbrook. I hope all went well.”

This was complete bullshit. “Yes, of course.” It hadn’t. I’d been in New York, but I’d been searching for London, not checking up on her father, Dr. Westbrook. London had been at my house, a house no one knew existed; at least, I’d thought that was the case. Now, I knew different.

“How have you been? Are you staying in the city?”

Her slow interrogation was meant to sound like casual conversation, but there was always a purpose to every word out of her mouth. To an outsider, it would sound like a loving mother. To any who knew her, it was a manipulative way to try to obtain information without appearing like she was doing anything but chatting.

I reached the desk and bent to kiss the cheek she offered. My lips barely touched her cool skin before I straightened. I nonchalantly leaned against the desk beside her and crossed my arms. “I’ve been well, Mother.” I had no intention of offering anything else.

I’d been staying at a quiet inn just outside of Paris where the goats bleated all day and the linen sheets smelled like they’d been doused in lavender. Actually, the entire house did, but it was the last place Mother would expect me to stay and the bonus was the owner cooked brilliant meals.

I’d paid for a room in a five-star hotel in the city and had all my messages sent there. I did wonder how long it took them to discover I wasn’t staying there.

“Your flight was good?” She raised her brows that were beginning to thin out as she aged. The creases around her mouth and the corners of her eyes were more pronounced than the last time I’d seen her. But instead of making her look frail, as it did most people, the wrinkles hardened her appearance.

I chuckled. “Yes, three weeks ago, when I arrived.”

She smiled, unaffected by my slight. “I apologize. I had a few delicate and time sensitive issues to deal with.”

“Anything I can do to help?” I glanced at her computer screen and the security camera of the entrance to the front door was up. She’d been watching my arrival.

“No. No. A mere nuisance that I’ve dealt with.” She clicked the ESC button at the top left of the keyboard and the screen went black. “How is Georgie? What’s she go by? —Chaos? A shame about the Tanner situation. He was a great asset.”

Her comment was like a burr against my skin. That tiny prickle of warning to be careful as to what I said. But then, I was always careful around the bitch. It was best to follow what was expected of you when you were planning the unexpected. “Tanner was too attached to her and required elimination.”

The kid, Tanner, had been assigned to befriend Georgie and her brother, Connor, over a decade ago. It was before Connor was taken by Vault; he was now one of us—with a little coercion, of course. Never thought I’d give a fuck who Vault tortured, manipulated, or conditioned because I’d been one of them. But London changed that. She changed everything.

Mother nodded and a strand of blonde hair, streaked with grey, slipped out of her tightly woven bun and she pushed it back behind her ear. “Yes. You did warn us he could become a problem. But, he had his usefulness.” She paused, her eyes drilling into me. “And Deck?”