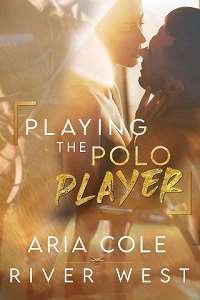 Saying goodbye to the sweet, beautiful horses I’ve worked with from newborn foals is never easy. And yet, it is the entire job. Breeding horses and raising them as healthily and happily as possible before selling them off to the highest bidder. I stare for a moment into the empty horsebox where the little guy was, that ever-present melancholy gnawing away at me.

It marks both professional success and emotional loss.

“At least this one is destined for fame,” I breathe to myself as I latch the door shut.

My eyes pan back to the polo club. Even though I’m just in the parking lot and delivered the horse to the stables, I feel out of place just looking at the building. It has to be the fanciest building in the entire county. The Chuk Polo Club is made of elaborate, sand-colored masonry work, sleek steel beams, and massive glass windows with a tint just dark enough to obscure the view into the building. And of course, massive marble statues of horses just outside the entrance.

It’s always amazed me since the day I moved here that polo is so alive and well in this community. I always assumed it was a British thing. Yet here, in Pine Heights, Virginia, polo and horse races are as popular as football. I suppose every town has its quirks; though, in this case, it’s county. Shaking my head, I step away from the horsebox and peer around to assess getting out of there.

Despite being a place which houses horses, the polo club doesn’t allow anyone to drive on the grass, and I was told when I arrive they did not want me parked on the curb outside of the building, either. So, I was forced to park in the lot—and of course, right behind my truck, is a brand-new looking … Jaguar…? No that has the little cat as an emblem. Whatever it is, looks to be worth more than I make in a year. Probably three or more. And it’s parked with reckless abandon. It’s angled to take two spaces and the back end of it is hanging out into the aisle.

I take a calming breath. “Relax, Luce. You have…like…” I hold my arms out as though to measure. “Fifty thousand feet between you and that thing.”

It isn’t fifty-thousand feet, it’s the typical length between adjacent rows in a parking lot. Still, thinking about it as some massive chasm brings me a little comfort. I’m a good driver, but parking lots have always been my kryptonite. Getting into the truck, I put on an upbeat, British rap song that is goofy and just enough to distract the part of my brain that is desperately trying to overthink. The beat is catchy and sort of retro, and my shoulders bounce in a little dance of their own as I put the truck in reverse. As soon as I know I won’t side swipe the car next to me, I cut the wheel sharply to have the trailer point down the row.

I’m biting my lip as I turn my body, trying to see the path behind me, but it is pointless, as the trailer is obstructing my view along with the cars parked on my side of the aisle. My eyes dart between my mirrors and I am confident that I’ve just spent the last few minutes fretting over absolutely nothing. My head bobs to the rhythm as I turn the wheel more and give it a little more gas.

My foot moves on its own to stomp down on the brake, but the rest of me is completely frozen. My consciousness has logged out of the operating system and is lagging to reboot.

That did not just happen.

It must be my imagination, right? There’s no way. I had room, and I cut the wheel like I have a million times—

“Are you fucking kidding me?!”

I hear the voice from behind my truck and I just know. I know he’s screaming at me.

So not my imagination. I hit it.

My body shrinks into the seat, and I allow myself to imagine melding into the fabric, disappearing from the Hell that is surely about to be released upon me. No matter how much I try to keep my eyes locked on the steering wheel, a figure out of the corner of my eye draws my attention.

It’s a man, not much older than me, and he’s storming toward me with his finger pointed right at me, even though I must just be a pool of hair at this point. His face is pulled into a look that reminds me of a gargoyle. It’s something between a scowl, a disgusted sneer, and unbridled rage.

“Idiot!” he hisses. “Do you know what you’ve done with this piece of shit of yours? Do you know how much that Bugatti costs?!”