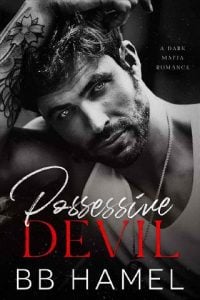 He’s there, just in the other room: the guy from my nightmares. I’m about to get myself killed, but I’ll take the bastard down with me.

I pull out a small plastic baggie filled with white powder, shake it a couple times, open the zip top with shaking hands, and pour the stuff into a cut-crystal glass of obscenely expensive whiskey. I stir until it dissolves before I shove the baggie back into the waistband of my skirt—there’s nowhere else to hide it, not when I’m wearing barely more than a plunging crop top that’s essentially lacy underwear and a skirt that only just grazes the bottom of my ass—and for weeks I’ve been coming to work with it hidden in my tiny little uniform, which has been like torture for my already-frayed nerves. I thought about keeping it shoved down my top, but I realized quickly that too many men stare at my chest and get a little handsy, even if I’m supposed to be off-limits, and the chance of someone noticing it were way too high.

I’m trembling as I heft the heavy lacquered wood tray with its pristine green felt center and the drink glistening in the middle and look around the quiet janitor’s closet. Mops, buckets, racks of supplies, a utility sink, and not much more. My little haven when work gets too bad and the only place I know I can be alone for a few minutes, away from the leering guys eye-fucking me to death and the catty dancers annoyed whenever a drink girl steals some attention away and the bartenders with their quiet, judging boredom.

Life isn’t always roses, but I’ve suffered indignity and disgrace in peace like a good quiet girl is supposed to, and now I’ll get my chance to make some noise and fuck shit up and let everyone know just how I feel about getting walked on and slapped around and strangled my whole life.

Bass thumps through my bones from the front of the club. If anyone catches me in here with a drink tray bound for the back room, I’m totally screwed, no matter how often I sneak in here. That’s beyond against the rules and there would be way too many questions, so I take a couple deep breaths, whisper a little prayer, and step out into the dark back hall.

Nobody’s around. I straighten my clothes and put on my game face—it’s the look of a girl that knows what she’s doing and isn’t afraid of anything, even though my brain’s currently screaming oh my god Grace oh my god don’t do it Grace don’t do it you absolute psycho which isn’t exactly easy to ignore, but my game face hardens me and makes me think I’m someone else, someone stronger and sharper and better, someone that’s not from the back woods of West Virginia with pine sap in her veins and scars etched into her skin, and it gives me the false courage I need to keep moving forward.

I march past the bathrooms where a small gaggle of other drink girls stand gossiping with each other. I wave to Ginnie and Kia and they wave back, though Juniper throws me a dirty scowl—she’s hated me ever since one of her favorite clients started preferring me over her, which wasn’t my fault, I even told the guy I wasn’t interested in stealing him away, but he’s a persistent asshole that tips really well. He keeps saying I’ll break down one day and give him a special dance, but I definitely won’t, although I haven’t expressly said that yet—better to let him have some hope and keep bringing me those hundred-dollar bills.

And anyway, I’m not here to make friends—I’m here to lose them.

“You on the back rooms, Gracie?” Ginnie asks, a pretty white girl with big red hair and a perky attitude.

I nod and pat the tray. “Got a drink for three right now.”

Kia chews her lip and glances over her shoulder before leaning closer. She’s extremely pretty, with dark hair, long lashes, smooth brown skin and an easy smile. “Lucky girl, I knew I shouldn’t have switched. You know who’s in there, right?”

I know exactly who’s in there.

I know every detail about him, everything I’ve been able to find at least—I know his face, his weight, his height, his wife’s name and how many children he has, I know what he’s been accused of doing and how many men he’s allegedly killed, I know he’s allergic to strawberries—not bad enough to make him choke to death unfortunately—and that he hates the Rolling Stones but loves the Beatles and thinks Type O Negative is the greatest band on the planet.

I know the bastard better than I’ve known anyone in my life, except for maybe Riley, and she’s lodged so deep in my bones that my inner voice is her voice, whispering to me all the time, keeping me up at night, keeping me grounded and out of an early grave.