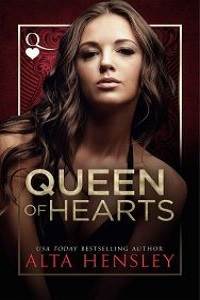 I slam my fist into my bedroom wall, furious and suffocating with the urge to kill someone. On my knuckles blood mixes with the black soot from the fire I just spent hours fighting. And now it’s all over my wall. Black and red. Fury and death.

“Where. The. Fuck. Is. She?” My voice pops through the air like bullets being fired from a gun.

I want answers even though the way my security looks at me—wide-eyed, fear visible in their stance—I know they don’t have them to give.

“Did you search the entire house?”

It’s a stupid question. If she’s not here in my room where I left her, or at the very least in her own room down the hall, then she’s not in the house. I know this. I don’t even know why I’m bothering asking the question other than to try to calm the raging madness inside of me by asking mundane questions.

“How is it that my security team has no idea where Lyriope is? What the fuck do I pay you for? And why the fuck haven’t I just shot you both through the eyes because of your carelessness?” The question burns my tongue, and I have visions of cutting out someone’s tongue in retaliation for the incompetence of my staff.

“We were all extinguishing the fire,” Harrison defends, stepping in with confidence. He’s the only one in this room with the balls to actually speak the truth to me. “Everyone was at the dock.” His eyes lock with mine, silently telling me to calm the fuck down. “Our focus was on putting out the fire before authorities came.”

I take a deep breath, knowing he’s right. We were all there. The entirety of my available staff.

We left Lyriope alone. Vulnerable. A flashing beacon just begging to be stolen.

I begin pacing the room. “They blew up my boat to distract me. To distract us all. Then they came into my house to steal her from me.” I need to speak the words out loud. To make them real. To help me face my new reality.

I stop and look at Harrison. “Morellis or Constantines? Who the fuck has the nerve to do this? You don’t think it’s the Sidorovs, do you? They didn’t seem interested in Lyriope at Wonderland since I paid her debt off, but that could have all been an act.”

Harrison shakes his head, points to one of my guards and orders, “Go see if they found anything on the security footage and let us know who she left with.” Both of my security rush out of the room, clearly grateful to no longer be in direct fire of my rage.

“I want to kill someone,” I say as I struggle to blink away the mayhem that is taking over.

“It won’t be hard to find out who did all this,” Harrison says. “We’ll retaliate in the loudest of ways.”

“This is inexcusable,” I shout. “To come to my house. My. Fucking. House.” I march over to my bedroom window and stare down at my charred dock and what was once my boat. The morning sun is reflecting off what’s left of the structure. “I want to know who did this, and I’m going to make them pay. I don’t care if it was the Morellis. Past friendship or not. If they did this, then this means war. I’ll give them a goddamn bloodbath to deal with.”