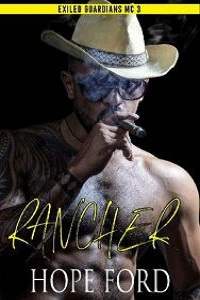 I grip the crutches in my hand and throw them to the floor before falling to the couch. “Fuck!” I scream at the top of my lungs. I lean forward and rest my head in my hands.

I’ve dealt with a lot in my lifetime. The death of my parents, the death of my comrades in war, my wife leaving me while I was in the army. I’ve handled it all, and pretty well, I’ll admit.

A loud knock sounds on my front door and I don’t even attempt to get up. I’m hoping that whoever it is, they take the hint and just leave.

But of course, I have no such luck.

“Rancher! Where are you, brother?” I hear Sniper and the sound of multiple boots stomping across the floor.

“In here,” I holler, leaning my head back on the couch. I’m preparing myself for what I know is about to happen. This isn’t the first time that they’ve come and tried to get my ass off the couch.

They walk in, Sniper, Brick, and Keeper, members of the Exiled Guardians, the club that I’m a patched member and road captain of. Well, was. I can’t be any kind of road captain if I can’t get my ass on a bike. Instantly, I get pissed off because of the looks on their faces. That’s the same look every brother in the club has given me… pity.

I was in a bar fight a few weeks ago and tore ligaments in my leg. They say I should be okay, but I’ve had to take a few weeks to heal before starting physical therapy. I went to one session and quit. I told them I thought it was a waste of time, but honestly it was because I couldn’t do half of what they asked me to do and it was frustrating as hell.

“We brought you something,” Sniper offers.

“Well, unless it’s the Fallen King that jumped me and put a knife into my leg, I don’t want it.”

Sniper shakes his head, and honestly I don’t blame him. I know I shouldn’t be talking to him like this. He’s taken a lot of my shit, but I’m pretty sure my time is running out.

He smacks his hand to his leg and looks at me fiercely. “Ranch, you know he was dealt with. We weren’t going to let them get away with it.”

I nod my head and lay it back again, closing my eyes.

“All right, boys, well, if that’s it, you can leave now.” I wait to hear the shuffling of feet, but don’t hear any.

Then out of nowhere, I hear a soft feminine voice, “Yeah, boys, it’s fine, you can leave now. I got this.”

I open my eyes and my head jerks up, looking for the source of that voice and I’m not disappointed when my eyes land on the absolute prettiest filly I’ve seen in a long time. She’s curvy, with long red hair in a ponytail and bright green eyes that are sparkling back at me from the other side of the room. She’s covered in what looks like a nurse’s uniform, but it does nothing to hide her curvy body.

I peek over her shoulder and Smoky follows in behind her, carrying a suitcase. “Miss Lane, I’m going to take this to the spare bedroom.”

She never takes her eyes off me, but she thanks Smoky for carrying her bags.

I lean forward and rest my hands on my knees. I want to get up, but refuse to do so with so many people watching me. “Well, now, boys, this is more like it. Finally, you brought me something I will like.”

Keeper steps in front of the goddess and blocks my view. He walks toward me with his hands up. “Rancher, it’s not like that. She’s a physical therapist. She’s going to stay here for a while and help you use that leg again.”

She looks surprised by my apology, but accepts it readily. “None taken.”

“I’m not doing it, Keeper. Y’all can just take her back wherever you got her. I can figure this out on my own,” I tell the lot of them fiercely. I hate being like this. I hate being weak.

The woman that will probably be starring in my dreams tonight walks toward me and sits on the edge of the coffee table right in front of me. Her knees are touching my legs and I swear I can feel my cock twitching at her closeness. I fight the urge to adjust myself. It’s been too damn long since I’ve been buried in pussy, I tell myself. But honestly, I know I’ve never had pussy like hers. Her smell, a fresh lavender scent, hits my nose and I take a deep breath in until I realize what I’m doing and the fact that I’m still surrounded by bikers.